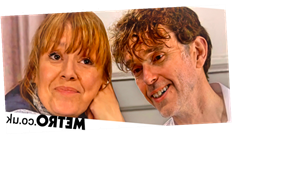 Marlon Dingle (Mark Charnock) and Rhona Goskirk (Zoe Henry) admitted their feelings for one another in Emmerdale tonight (January 7), and therefore rekindled their romance.

Viewers have been seen the former lovers strike up a connection once more in recent weeks, and it soon became apparent that the spark between them is still very much there.

However, Rhona had her doubts about whether Marlon felt the same away about her as she does about him, but little did she know that The Woolpack’s resident chef had the same dilemma!

Yes, Marlon was worried that she didn’t reciprocate his feelings, and honestly, could they be any cuter?

It would appear so, as with Paddy Dingle (Dominic Brunt) back in the village following his honeymoon with Chas (Lucy Pargeter), he decided to do some match-making.

After learning that Marlon is interested in Rhona, he did some digging to find out if Rhona is interested in him, and when she confirmed she is, he decided to spill the beans to Marlon — in front of Rhona.

Marlon and Rhona ultimately admitted their feelings for one another, and thus resolved to give their relationship another go.

We’re not crying, we swear!