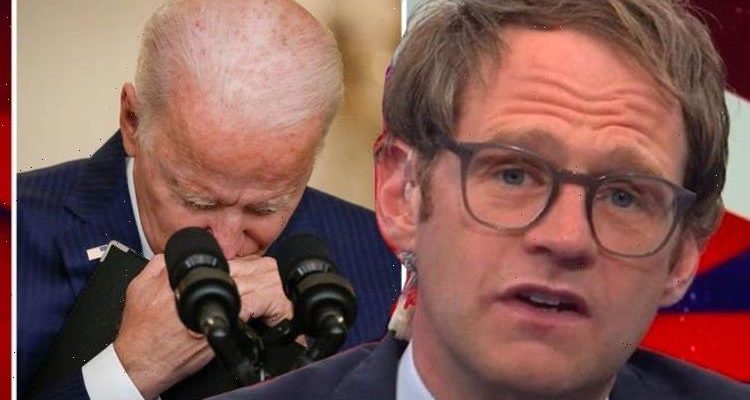 Joe Biden says US has evacuated 12,000 more people from Kabul

Mark Dolan, 47, was on hand to give his take on the latest headlines coming in from across the world and with the Afghanistan crisis dominating the news agenda, the presenter shared his opinions with viewers. Following President Biden’s, 78, address on Thursday, condemning the terrorist attack by ISIS-K at Kabul airport, the political broadcaster took aim at the Commander-in-Chief. The GB News presenter was furious over how he delayed the withdrawal of American personnel until the last minute, despite his predecessor Donald Trump, 75, striking the deal with the Taliban last February. In his rant, he claimed the President was “the most dangerous America had ever had.”

The host of the programme began his show by saying: “The tragedy of the crisis in Afghanistan, is that it didn’t need to happen.

“The so-called deal struck between Donald Trump and the Taliban, can’t be described as a diplomatic masterstroke, but the terms and conditions were not established, and the devil is always in the detail.

“Many accepted a gradual withdrawal, but the execution and timing of that withdrawal is where the problem lies.”

Placing the blame firmly on Biden, Dolan explained: “The execution of this departure was the exclusive responsibility of Joe Biden, and he is the one who has let down thousands of people stranded in Afghanistan, who supported the US effort over two decades.

“He is the one who has gifted the Taliban with the territory of the country, the priceless mineral resources beneath its soil, a multibillion-dollar heroin industry, which will now be the cash cow of terror.”

On how the Taliban has taken stronghold of Afghanistan, Dolan said: “We have literally armed these monsters.

“So it was an incompetent decision, with the logistics of getting that many people out in that short a time frame,” he continued, referring to Biden’s delayed response to the withdrawal process despite a deal being struck.

“And it was a strategic disaster, given that this decision has imperilled not just the people of Afghanistan and destabilised the region, but it has made the whole world a less safe place.”

Discussing how emotional the President became in the press conference from the White House on Thursday, Dolan claimed he made it “all about himself”.

It was an incompetent decision

“So even at this time of crisis that affects so many people, this supposedly lovely man, this mask-loving high priest of progressivism, the first woke US president, made it all about himself,” the presenter remarked.

“How dare he well up and cry, when the circumstances around what has happened, and all of the deaths, including American personnel and tragically we hear three Brits, including one child, are of his making.

“The first woke president has also been economic with the truth, saying earlier this week that Western allies are able to safely get to Kabul airport.

“That was not true – there were blockades, people were searched, attacked and even shot at by the Taliban,” he continued.

“His own military high command out there, said as much. His reassurances that most people that needed to get out of Afghanistan now have is also not true,” the presenter said as he continued slamming the President.

Dolan brought the discussion back to Biden’s “incompetence”, stating 120,000 civilians of Afghanistan were eligible to qualify for a US visa but they still remain in the country.

The presenter claims America are “the authors of this horror show” and he stated the “incompetence” of US officials means the Taliban will be able to dignity civilians who would have been able to qualify for a visa and punish them.

Concluding his rant of the President, the political broadcaster indicated he does not think Biden is fit for office.

“In my view, Joe Biden has neither the cognitive health or political and strategic judgement to lead America,” Dolan remarked.

“Our great ally has become a great foe, such is the disastrous nature of its leadership. Joe Biden is arguably the most dangerous President, America has ever had.”

By August 31, 2021, the UK and US have to completely withdraw from Afghanistan or according to a Taliban spokesperson, there will be “consequences”.

It was confirmed on Saturday morning all British personnel will be evacuated by the end of the day, with the UK military leaving the country a few days later.