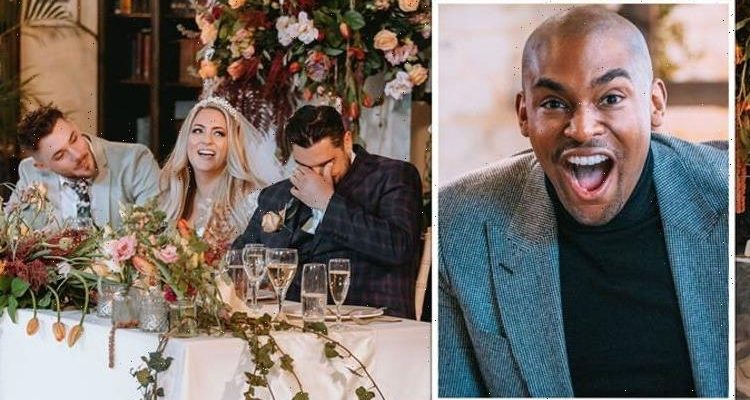 Married At First Sight UK is back on E4 and the quirky coupling-up series follows eight couples as they explore the concept of love at first sight. A panel of relationship experts take it upon themselves to match the singletons based on different criteria. Expert Paul Brunson spoke exclusively to Express.co.uk about the feedback he received on one particular match.

Married At First Sight UK has returned and all of the 16 singletons have now been partnered off with their new bride or groom.

With the weddings out of the way and the couples having met for the first time, they are now starting to get to know each other better.

However, one thing that can sometimes get in the way is the thoughts of family and friends.

This season has shown that family opinions mean everything, particularly for brides like Megan and Tayah.

Megan’s husband Bob was interrogated by her brother on their wedding day as he only wanted the best for her.

Meanwhile, Tayah’s mum said taking part in the experiment was an “irresponsible” move.

The MAFS experts spoke exclusively to Express.co.uk about how trying to impress the family can be the most daunting part.

Paul Brunson said: “The best moment, ever, for me, was there was a couple I was concerned about.

“They said ‘Oh my God, I didn’t think… I would have never have picked this person for my friend.

“But they are perfect, we love this person’. The fact that the friends were so happy and satisfied…”

He was not able to specify which wedding he was referring to.

He said the experts put a lot of weight on what the friends and family and social circles think.

The relationship expert added: “That’s the glue that keeps us in the relationship as later in the experiment the couples take their partner and they go back home.

“So those are some of the most tense moments.” Fans of the current series are waiting to see how the parents react to meeting their new in-laws.

Fellow expert Mel Schilling admitted she felt nervous about some of the matches.

She told Express.co.uk: “The family is such an important part of our decision making process.

“For someone to be with a new partner the family, for example, don’t accept or they are being judgemental about, it can create real self-doubt in that relationship.

“I have got to admit there’s times when I hold my breath a little bit when someone goes back to the family and I know there’s potentially a bit of turmoil there.

“We are seeing time and time again that a relationship can be going okay but when we introduce that external factor of family and friends all sorts of doubts can start to creep in.”

Tayah’s father did not attend the wedding as she said he did not agree with the concept of the experiment.

However, she took a moment to show her gratitude towards her mother, who was there for the big day.

As for the other couples, only time will tell whether the parents are able to accept and embrace the matches.

Alexis was paired with Jordan and her mother was uncertain as to whether they would last.

Jordan was too quiet for Alexis and her family, so he will need to prove he can open up and be confident around her.

The couples will meet each other’s families in the upcoming episodes.

Married At First Sight UK airs from Mondays to Thursdays at 9pm on E4.