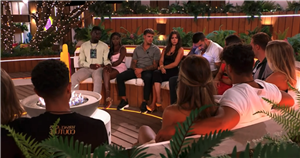 Love Island fans were left on the edge of their seats after three couples were left at risk of being dumped.

Fans of the show were surprised to find out that Paige and Adam, Danica and Jamie and Indiyah and Dami were all in the bottom three.

The results were voted by the public and revealed on Tuesday's programme (July 26).

Who will be leaving next will be announced on tomorrow night's show (Wednesday 27).

Fans stormed to Twitter to comment on the news, with one writing: "Ok but what a pointless cliffhanger everyone knows it’s Danica and Jamie?? #loveisland" A second ranted: "I'm blaming all of you for talking s*** and bashing indiyah and dami then all of a sudden acting surprised and sad that they’re in the top 3 as of u didn’t cause this yourselves #LoveIsland"

While a third penned: "every week we’re given the opportunity to get rid of luca and every week we fail #LoveIsland"

"Realistically speaking tho it's deffo gunna be Adam and page dumped. They're annoying and irrelevant atp but alot of ppl love Danica so she might be safe, but I deffo don't think Damiyah are leaving #LoveIsland

#LoveIslandUK," a fourth joined in.

A fifth put: "Would rather have had Gemma and Luca in the bottom 3 than Paige and Adam#LoveIsland"

Another angrily posted: "Voting for gemma and luca who have f*** all chemistry than indiyah and dami, oh this country will never change… #LoveIsland"

"I don’t mind Dami in the bottom 3 but Indiyah deserves better. #TALKSWITHASH #LoveIsland," shared a seventh.

Another replied: "If Luca and Gemma was up there instead of Damiyah it would have been perfect #LoveIsland"