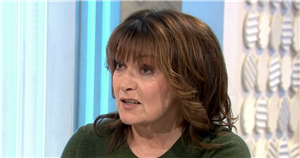 Lorraine Kelly couldn't resist a swipe at Prince Harry on her ITV show as she said she "doubts" he'll show his face at King Charles' coronation.

Lorraine was chatting to royal expert Russell Myers about Prince Andrew's attempt to get himself back in a public-facing role – but couldn't keep herself from hitting out at Harry and Meghan while she was at it.

Russell said: "On May the 6th we actually have the coronation at Westminster Abbey. There's going to be a big procession of the royals and a balcony moment with members of the Royal Family… Prince Andrew and Harry and Meghan, will they show up?"

But Russell forged ahead: "Lots of questions to be answered…" as Lorraine attempted to tone down her response, adding: "Who knows?"

Lorraine also wasn't having any of Prince Andrew's attempts to mend his image, asking: "Does he honestly think that he can make a comeback, that he can actually be part of the Royal Family?"

Russell joked: "As it was said to me previously, the only person in the world who thinks he does have a chance is Prince Andrew himself. I think that this smacks of entitlement, privilege once again.

"He thinks he's got a clear run at trying to exonerate himself, although we do know he paid £12million to Virginia Giuffre, that the Queen did make her contribution to as well.

Lorraine agreed: "It really does. I mean, paying that amount of money and now wanting to claw it back? All very odd. Do you think he'll be at the coronation – albeit behind a pillar?"

Russell said: "Well, would he want to be? Prince Andrew would say he always said he didn't do anything wrong, that he couldn't remember meeting Virginia Giuffre, so let's wait and see what happens."

Lorraine also pointed out: "When you've got someone like Ghislaine Maxwell speaking up for you, is it better not to have anybody at all? But she has been talking about it from her jail cell!"

Both pointed out that Andrew's timing appears "suspect".

Lorraine airs weekdays from 9am on ITV1.