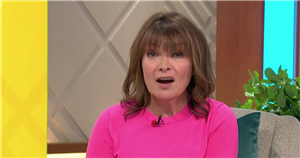 Fans of ITV's Lorraine have been left far from impressed after the presenter shared her opinions on Prince Harry and Meghan Markle's no-show at Prince Philip's memorial service.

Host Lorraine Kelly appeared baffled by the fact that the Duke and Duchess of Sussex were not in attendance at the ceremony which took place in London on Tuesday (March 29) and said she had hoped Harry would come last minute.

Talking to royal reporter Russell Myers, Lorraine appeared concerned about the couple and said Harry would "regret" his decision not to go.

The presenter said: "I must admit, up until the very very last minute, I thought 'you know what maybe Prince Harry would come over for goodness sake'.

"I think he's really going to regret this Russell."

But fans at home were not best pleased with Lorraine's comments and rushed to Twitter to share their thoughts.

One person penned: "Harry doesn't owe you or anyone else a bloody thing! A 37 year old husband and father who lives in California and attended his grandfather's funeral, decided a long time ago, he wasn't attending the memorial. What is there to regret?"

Another chimed: "Knew Lorraine would mention Harry and Meghan. Harry went to his grandfather's funeral. Him not attending the memorial doesn't diminish his love for his grandfather. He doesn't have to prove his love for grandparents to people who don't care about him."

Meanwhile a third annoyed viewer penned: "Can someone tell #lorraine to mind her own damn business about #PrinceHarry not coming over, as if he was gonna come as last minute. He said what he said, end off! Concentrate on the #RoyalPRMess and #RoyalTourCaribbeanMess you can’t bring that on Harry!"

Divulging into the issue further, Lorraine said: "He's not gone because he says he doesn't feel safe.

"For goodness sake they're in Westminster Abbey. Can you imagine how many beefy beefy people are in there."

But fans were also disappointed with Lorraine's opinions on the Queen being escorted into the venue by her son Prince Andrew as she said she would have loved if someone else stood by her side instead throughout the memorial ceremony.