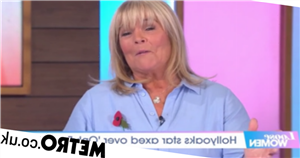 Actress Sarah, who plays Mandy Richardson on the Channel 4 show, recently signed up to the 18+ subscription service to share ‘racier’ images with fans, who have the option to pay for content.

However, it was revealed on Wednesday the soap had decided to axe Sarah from her long-running role, due to her decision to join the website, a decision which has caused a backlash from fans.

On the latest episode of Loose Women, the topic quickly came up for discussion between Charlene White, Carol McGiffin, Nadia Sawalha and Linda Robson.

Linda decided to defend Sarah after the soap’s decision, sharing: ‘Do you know what? I don’t know what all the fuss is about to be honest, it’s just what you see on social media every day.

‘They do wear scantily clad clothes all the time on Hollyoaks, often the young blokes stripping off, just their trousers or their pants or whatever.’ 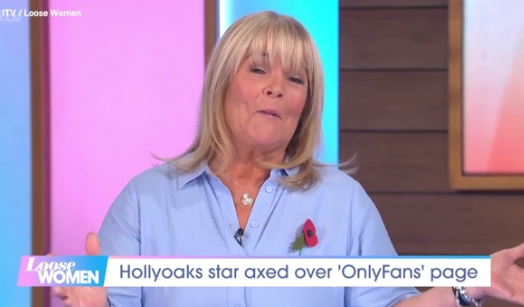 Linda did admit she ‘wouldn’t like’ her daughters to be on the adult content site but continued to side with Sarah, adding: ‘I don’t think know what the big fuss is about.

‘It’s only what you see on social media every day of the week, you can go through Instagram and people are in their swimming costumes, posing, pouting whatever!’

Her co-star Carol weighed in and pointed out: ‘They [Hollyoaks] made their own calendars with stars doing the same thing.’

A spokesperson for the show previously told Metro.co.uk: ‘Hollyoaks is a youth-facing drama with many young viewers, who follow our cast very closely, both in the soap and outside of it.

‘We take our responsibility to our young audience very seriously and therefore the show does not allow any Hollyoaks cast members to be active on certain 18+ websites.

‘We had hoped we could reach a resolution with Sarah that would allow her to remain in her role as Mandy, but we respect her choice to continue to produce content on OnlyFans

‘In the past four years since her return to the show her legacy character has been an integral part of some our most important storylines and we will be very sad to see her go.’

Explaining earlier this week, Sarah told her social media followers she had thought ‘long and hard’ before choosing to share photos on the adult content site, and said she felt it was about ‘empowerment and confidence.’

The soap star has since thanked her fans for all their ‘support’ since the soap’s decision was confirmed the previous evening.