It was a huge night for weatherman Sam Champion who made his debut on Dancing with the Stars on Tuesday evening – and his friend and colleague, Lara Spencer, was right there beside him.

The GMA star was incredibly nervous but excited about his performance with pro-dancer Cheryl Burke, and he’s been documenting his journey ahead of the show.

Fans have been flooding him with support as he geared up for his big moment – and that includes Lara.

Just last week, Sam revealed he was awake at 2.45am and ready to get some practice in. The mom-of-two commented on his feed and revealed her plans to rally him on as she wrote: “So proud of you my brother. I am flying out to cheer you on.”

Lara finished off her message with a heart emoji and Sam replied with a joyful: “Yayayayaya!!”

She stayed true to her word and shared photos this week with her pal. One image showed her pointing at Sam, who was wearing a jacket with Champion emblazoned on the back of it. 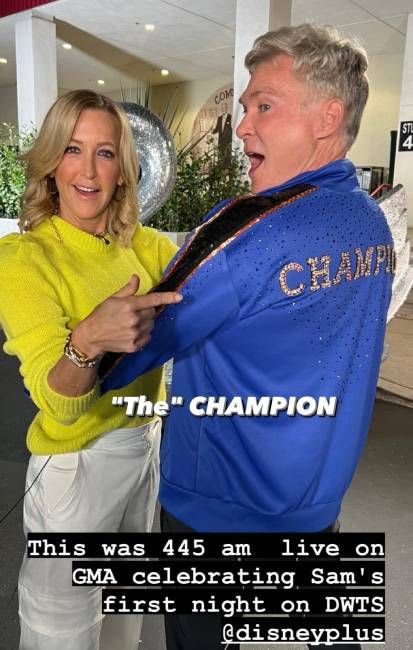 Lara is cheering Sam on in LA

Lara said the photo was taken at 4.45am when she was reporting live on Sam celebrating his first appearance on DWTS.

Sam is determined to put his all into the show, but has admitted that it’s far from easy.

Although he did also make his fans laugh when he documented a very different dilemma he was struggling with – what to pack before he flew to Los Angeles.

“I had to share this with you,” he said in a video between laughter, adding that: “I am in the middle of a freaking mess.”

Revealing that he is not sure how long he will even be on the show, though he hopes to make it far, he said: “I am in the office right now trying to figure out… What do you take to LA for maybe three weeks? Four weeks? I don’t know, Cheryl is going to say eleven weeks, awesome, but I’m just counting on the first few.”

After apologizing to fans for the “mess”, he flipped the camera around to reveal what he had so far, and he appeared to be much more organized than he gave himself credit for as he had neat piles and bags placed around the room.