Josie and the Pussycats have reunited! Stars Rachael Leigh Cook, Rosario Dawson and Tara Reid have come together with ET’s Nischelle Turner to celebrate the 20th anniversary of the 2001 cult musical comedy, loosely based on the Archie Comic series and the Hanna-Barbera cartoon.

“Guys, we were such babies,” says Dawson, 41, as she and her co-stars watch an old clip of them promoting the film when they all were in their 20s and about to become some of the biggest stars of the early ‘00s. “This is blowing my mind right now,” Cook, also 41, adds. 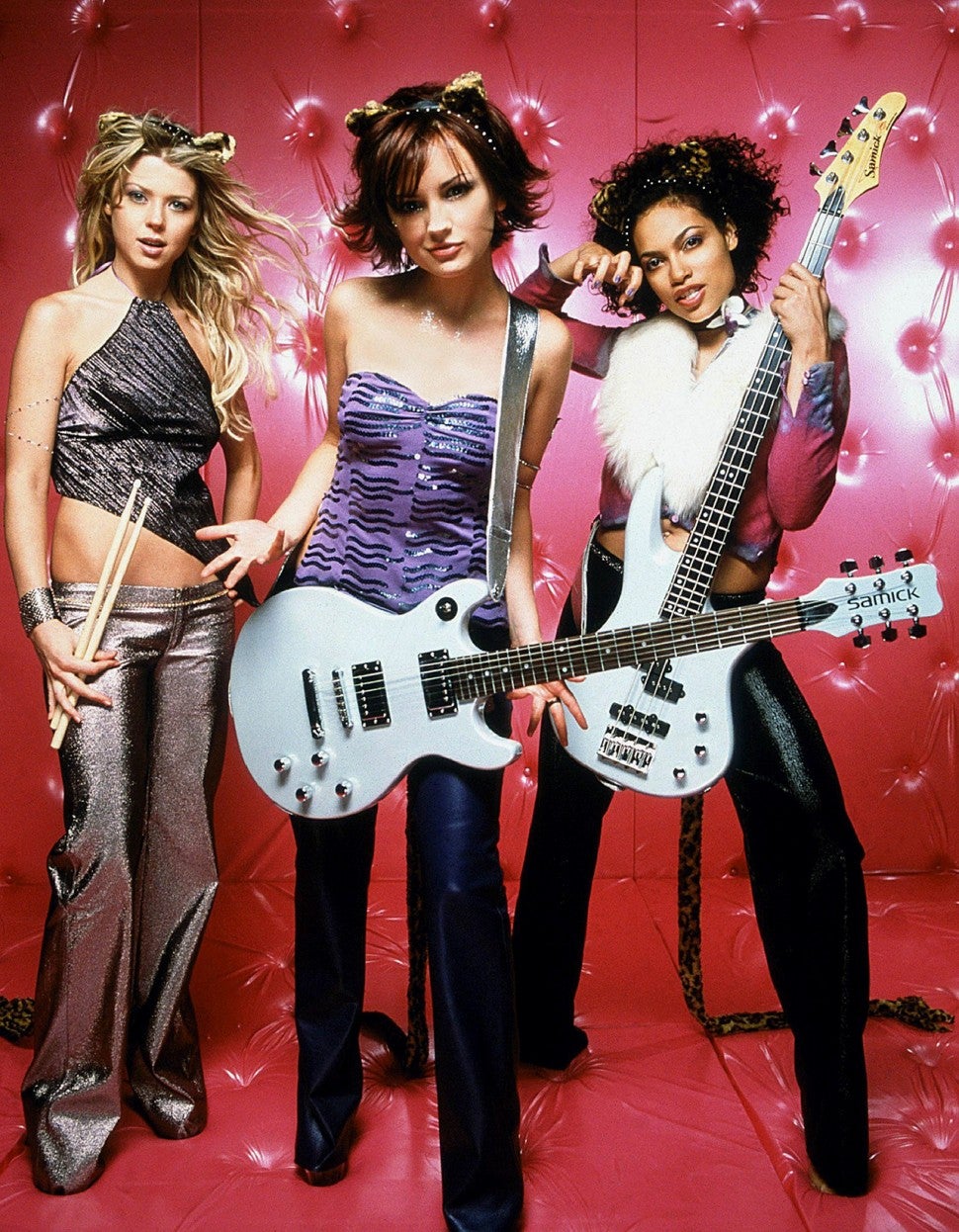 “I was so excited to even be asked to be a part of this,” Dawson recalls. “I remember I had just turned 21 [while] filming in Montreal and I started four days later in Vancouver with these lovely ladies and I was such a huge fan of theirs.”

At that point, Reid and Cook both had made a stamp on the teen comedy world with roles in American Pie and She’s All That, respectively. Meanwhile, Dawson was just emerging on the scene with roles in Light It Up and Down to You.

“We could not go anywhere without people jumping all over them and freaking out,” Dawson continues, explaining how “awesome” it was “to be around all of these women and to have this community and love and to be telling this story that was so pro women and just powerful.”

Reid, 45, echoes that sentiment, adding, “We loved each other and it was a girl movie, so we would go out at night and do these things and have the best time and we would read the script at the hotel and memorize our lines and it was just so much fun. It really was.”

What the film did best was to harness the energy that came from all three stars  together on set. “So much of it was just these moments of kind of just capturing us being together that were unscripted… Like, a big chunk of filming on this was us just being together and vibing together and [the directors] just capturing it and then creating these moments with the songs kind of playing,” Dawson says of all the montage scenes. “And it was such an unusual experience, because it really was about our connection to each other, our vibe, our solidarity.”

She adds, “It feels so authentic because we really were this like family. After work, we’d all hang out together, and eat, and chat and hang out. Like, it really was just months and months of us just like really embracing each other’s energy… We were a tribe.”

Reid agrees, adding, “We had so much fun. Like, it was incredible. It wasn’t just a movie that we made, it was an alliance of friendship. And we would do everything together.” 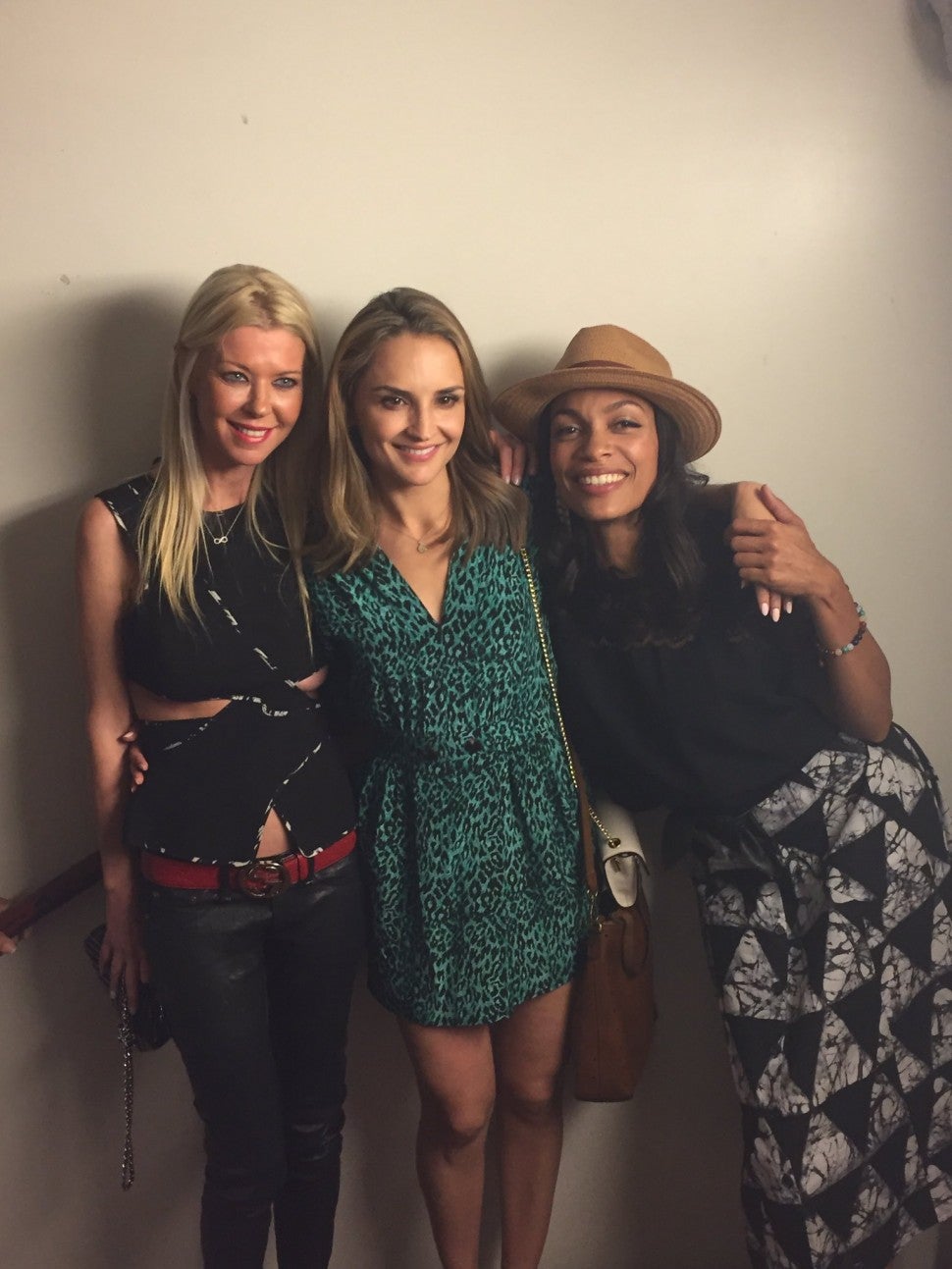 Tara Reid, Rachael Leigh Cook and Rosario Dawson got the band back together for a reunion and concert.

While the movie is largely defined by the cast and the pop culture zeitgeist of the time, it also perfectly captures that late-’90s, early-’00s fashion. “I’m gonna be honest with you, my favorite pieces I wore were these bell bottom shorts and this little leather top that was chopped up,” Reid says.

“For the film, it was utterly spectacular,” Cook says, giving credit to costume designer Leesa Evans, who went on to work on Bridesmaids and Always Be My Maybe, among many other films. “[She] just knocked it out of the park for us. I loved the sort of ripped-up Sid Vicious shirt that they had me in. But the looks overall, I don’t know what to say. I thank every power that is that my eyebrows grew back.”

Although the film bombed at the box office — grossing a mere $14.9 million domestically — and the reception at the time led Kaplan and Elfont to quit directing movies, Josie and the Pussycats has become a lasting favorite among the teen films of that era.

“We’ve all moved on and did a lot of movies. But that was the most special movie I’ve ever done,” says Reid, who followed this project with more comedies like, American Pie 2 and Van Wilder.

“I just want to shout out our directors for just writing the most incredible script ever. Like, their writing is truly the star of the movie. Deb and Harry, thank you,” Cook says, adding, “I’m so glad that this movie is getting the redemption tour that it is. All the shouts out to them.”

Watch more from the extended interview above.