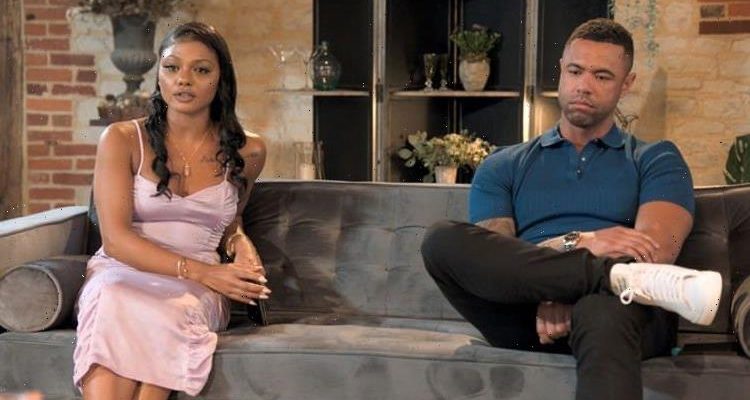 Married At First Sight UK is back with a bang and the series has definitely offered up some dramatic moments. In recent episodes, Jordan and wife Alexis hit some bumps in the road on their honeymoon. Jordan even suggested he was keen to swap wives, and fans believe the pair have already broken up.

Has Jordan broken up with Alexis on MAFS UK?

Married At First Sight UK continues tonight on E4 and the honeymoon stage is officially over for the couples.

Now, they will face the challenge of moving in together and meeting the other couples at dinner parties.

Preview clips for the upcoming episode show the first dinner party leads to some explosive rows.

Jordan and Alexis are already walking on eggshells around each other following their honeymoon argument.

Jordan ‘friend zoned’ his wife on the second day of their holiday and it knocked her self-esteem.

He admitted she was not his type, but he did say he would try to make things work.

He organised a water sports event for the pair, but Alexis took it badly when she thought Jordan was making fun of her.

The pair argued it out and Jordan ended up walking off, unhappy with the way his wife had spoken to him.

They attempted to make amends on the final day, but Jordan ended up telling viewers he would be happy to swap brides.

Claims have since emerged that the pair have split up, as Jordan had just broken up with his girlfriend of 11 years.

According to The Sun, he and Alexis ended their relationship after news of his previous girlfriend came to light.

However, the personal trainer has since hit back and negative viewers, saying on Instagram they should “be kind”.

He said: “Every single one of us are real people so just be kind it’s a lot easier to be kind than to be nasty.”

Promotional photos from upcoming episodes show Jordan and Alexis sitting on the sofa with a huge space between them.

They are most likely speaking to the relationship experts about their progress and how they can fix things.

The job of the professionals is to set the couples on the right path and iron out any issues early on.

Hopefully, the pair are able to reason with each other and break down the barriers they have since put up.

They were both seen attending the dinner party, so they were clearly keen to carry on.

Whether they remained together after the end of the experiment, is another question.

Fans will not know for certain what happened until the final episode when the couples decide whether or not to renew their vows.

At this stage, it is unlikely they will want to keep the relationship going long-term, due to their differences.

Jordan was hoping for another blonde-haired and blue-eyed bombshell, and this may still be what he is looking for.

He has expressed how he is open to possibly switching with another couple if the opportunity arose.

There could be some dramatic twists ahead for the newlyweds as they reach the end of their tether.

Married At First Sight UK airs from Mondays to Thursdays at 9pm on E4.