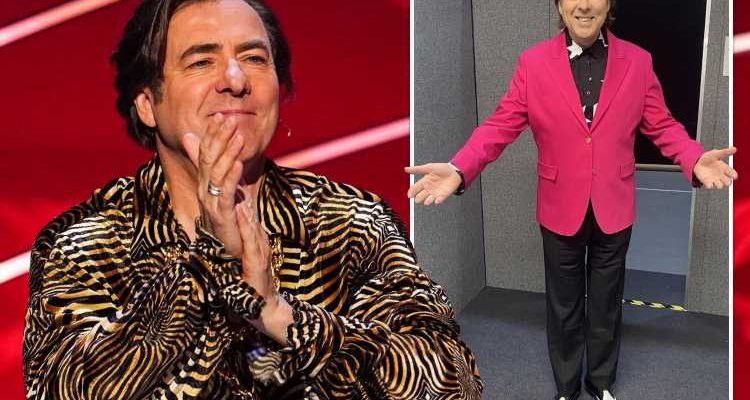 WITH a robot bunny, a stack of doughnuts and a traffic cone leading the pack, the costumes on The Masked Singer this year are crazier than ever.

But star judge Jonathan Ross reckons all eyes could actually be on him — thanks to a revamped wardrobe of eye-catching shirts and leather trousers. 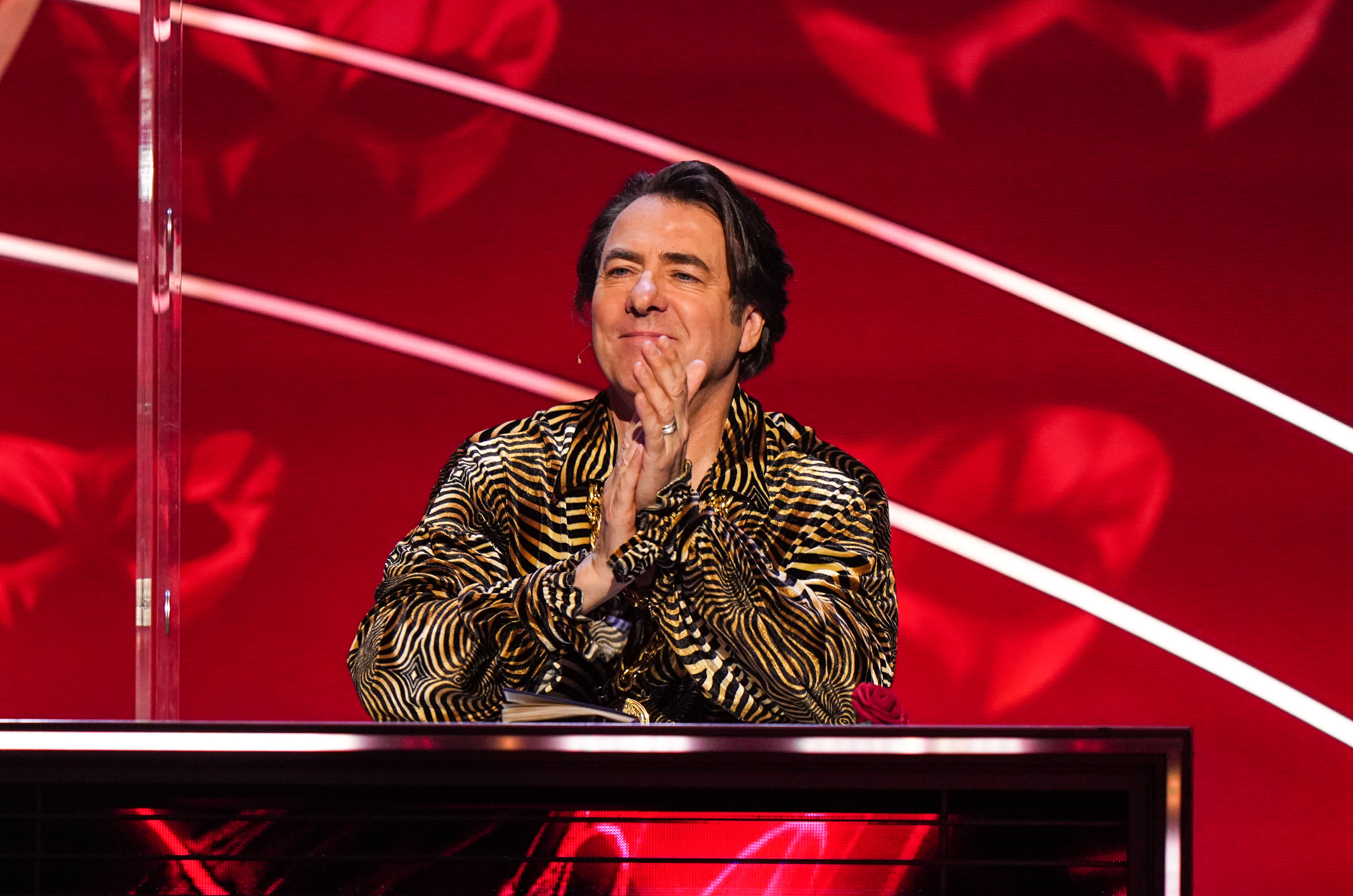 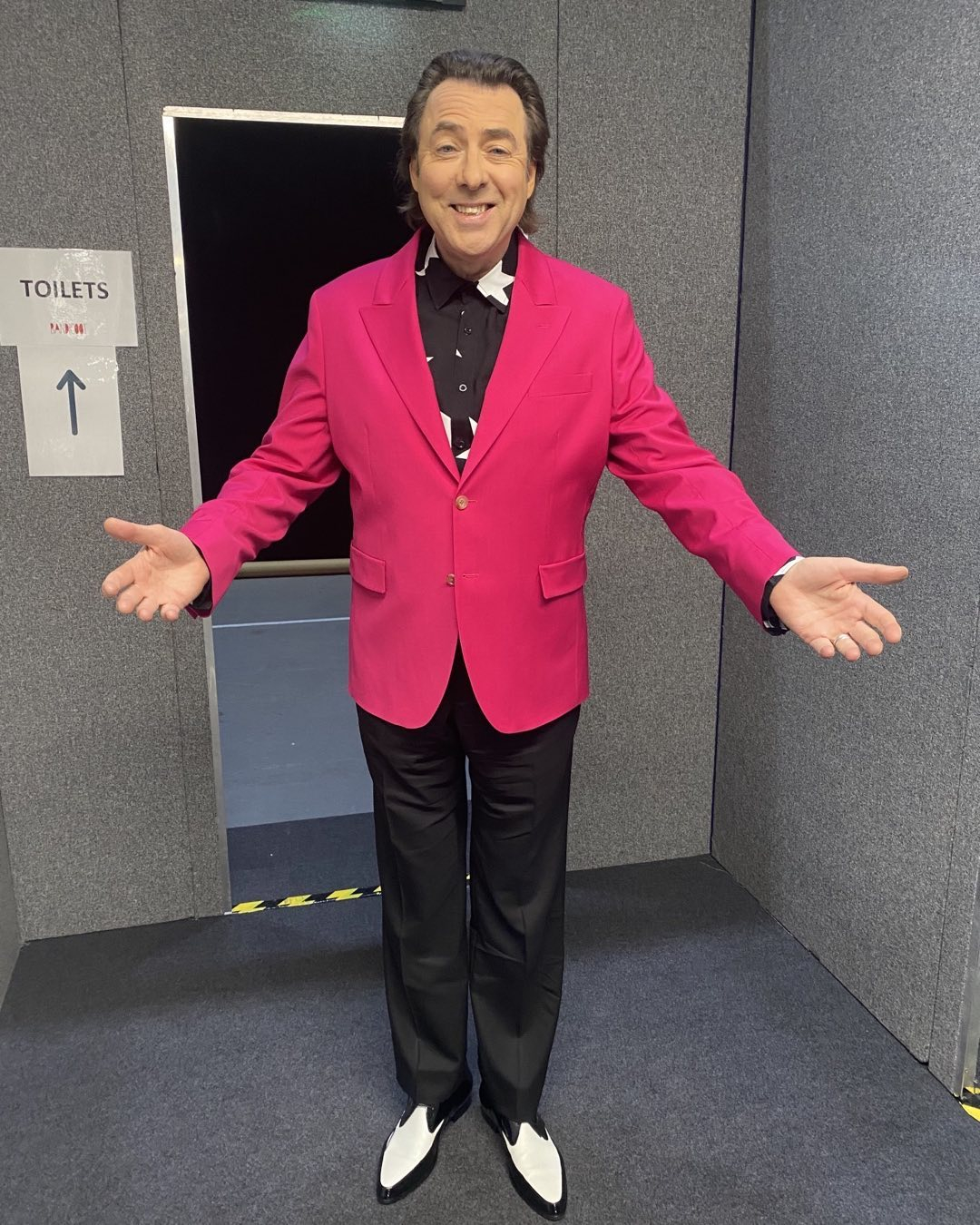 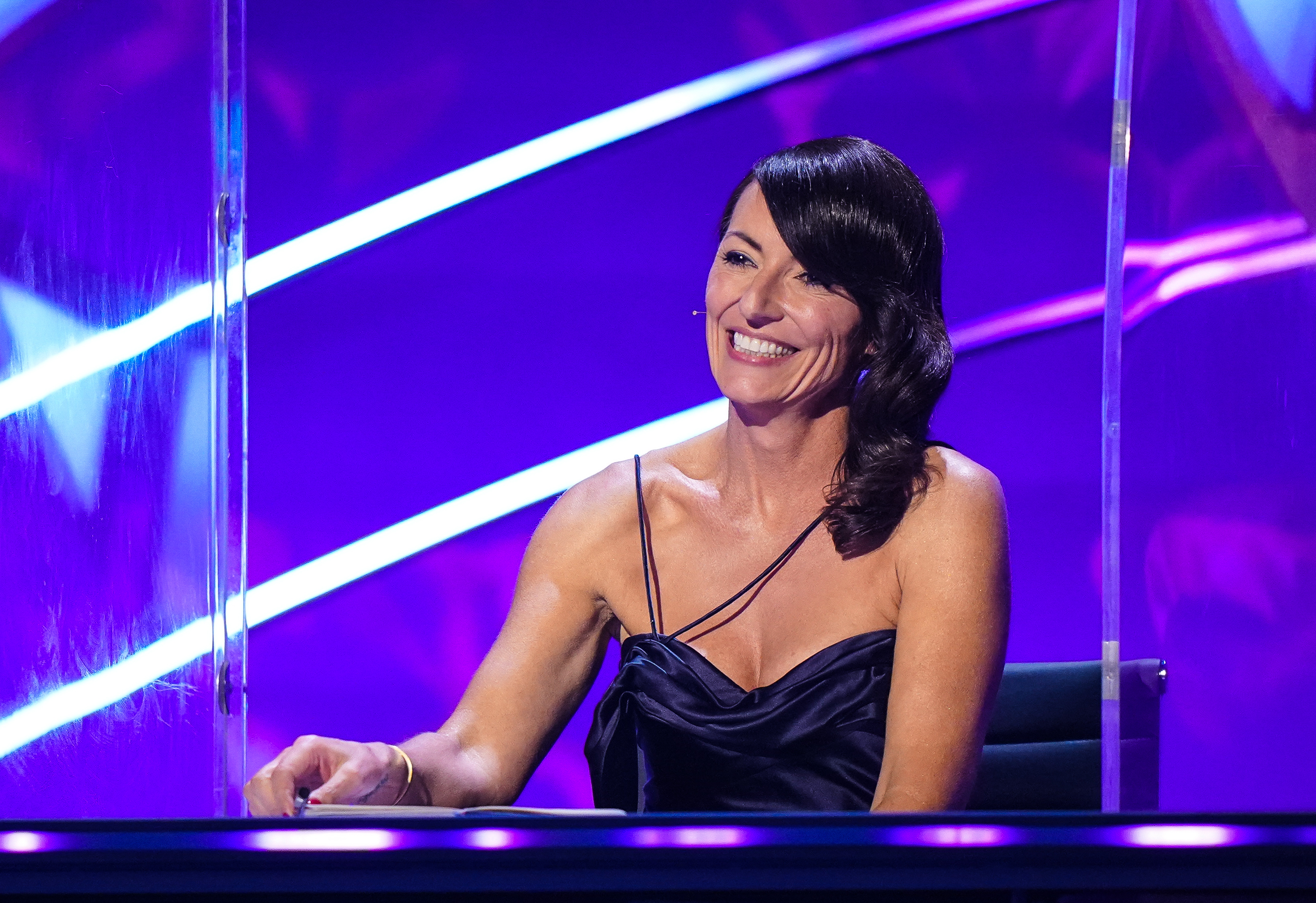 And he joked fellow panellists Rita Ora and Davina McCall are now his biggest fans.

In an exclusive chat, he said: “Davina and Rita are both spoken for, and yet they have a struggle each week when I walk in wearing leather trousers, perhaps a shirt showing a bit more chest than I should.

“I hope they look forward to seeing what I’m going to roll in wearing, because I really choose clothes to make them laugh a lot of the time.”

The chat show host has become the unlikely style icon of the ITV smash hit after swapping plain jackets and slacks for trendier pieces.

But unlike host Joel Dommett’s handmade suits and fellow judge Mo Gilligan’s fashionable looks, Jonathan says he digs his looks out of storage.

He went on: “I always like to see what Davina and Rita’s going to wear on the show.

“Mo always looks amazing and I turn up with a carrier bag with stuff I’ve dug out my wardrobe!

“I mean, literally, last series I found some stuff that I’d put in storage in the 80s.”

At 61, Jonathan is the oldest on the panel and has the most industry experience, but he’s far from a calm authority backstage.

THE KNIVES OF WINDSOR

Instead he says he’s a mischief maker, having turned his dressing room into a makeshift music venue.

And he’s even been told off for playing his music too loud.

The entertainer said: “Oh, I’m the naughtiest on the show.

“I’m leading by example, I mean, this show is all about fun, it can’t be boring so I’m like, ‘Don’t take it seriously because here’s the thing, you don’t know how long you’ve got. Seize the day!’

“Our dressing rooms are essentially cabins, they’re fine but they’re really dull. So I’ll turn up with a record player, posters, books, even some lamps to make it like my little home-from-home in there.

“I deliberately play music loud enough to annoy Mo, who’s next door, because he’s a very well-behaved young man, listening quite discreetly to some kind of UK grime that I’m not aware of. I’ll put on a Charles Aznavour album at full blast just to wind him up.”

Series two winner Joss Stone, who triumphed as Sausage, had to tell Jonathan to can the noise when she returned to film this series final earlier this year.

Jonathan said: “Joss knocked on the door and said, ‘Jonathan, I’m sorry. Do you mind keeping the noise down, my baby’s asleep!’

“You’ve got to have fun though, haven’t you?”

Aside from the fun, the celebrity panel has a job to do.

They are charged with leading the nation in ITV’s star-spangled guessing game, trying to judge who is behind each mask.

And Jonathan says Davina has set up a police incident-style room backstage because she takes the task so seriously.

He said: “Davina prides herself on being a kind of methodical, almost clinical detective.

“She genuinely does make reams and reams of notes, and then back references.

“You go in her dressing room, it’s like one of those rooms where someone’s trying to catch a serial killer.

“She’s got pictures up with red string from one thing to another, and yet still she fails to crack the case on a regular basis.”

Pop star Rita has the best record so far — but Jonathan reckons it is only because she stole guesses from others in order to win.

He added: “Rita did nick a couple of guesses early on but she’s seen the error of her ways. Let’s just say there is some good natured poaching that goes on occasionally.

“But what’s funny is I do cringe when I watch it back, because Rita will be like, ‘They’re not a professional singer’. Later on, it’s one of the best singers in the world but they were disguising their voice.”

And what about comic Mo, who completes the line-up?

“Mo is genuinely there for the good vibes and just to have a laugh,” added Jonathan, who’s been part of the show since it launched in 2020. I think he’s quite relaxed about it all.”

While there is no prize for whoever manages to successfully guess the most masked singers, just three weeks into the competition it is actually Jonathan who is leading the way.

He correctly guessed Will Young as Lionfish and successfully unmasked broadcaster Gloria Hunniford as Snow Leopard.

"She doesn’t text me. She doesn’t WhatsApp me, so she may well be in one of the suits.

“I don’t want to give it away, but you never know, she might be inside Robobunny. I mean, I’m just putting that out there. Not inside the whole suit, just inside the bunny part of the suit, she’s a small lady!”

The Masked Singer, which was created in South Korea, has become a global sensation with versions around the world including America and Australia.

Now all eyes are on the latest batch of pampered personalities to have donned wacky disguises to belt out hit tunes like Shallow by Lady Gaga and the Kings Of Leon track, Sex On Fire.

It’s not just families across the country trying to turn detective, Jonathan says his showbiz pals text him for clues. And even A-List guests appearing on his chat show pester him to reveal the top secret identities.

He said: “David Walliams will text me and say, ‘I think it’s so and so’.

‘I did question if Kylie could be behind mask’

“I’ll go, ‘No. You’re miles wrong. This is why you would be no good on this show. Go and write another kids’ book.’

“I do make sure that I don’t tell anyone anything. I mean, my response is always, whether someone’s right or wrong, I’ll just write back, ‘Oh, interesting’. That’s a good phrase to use, because you’re not lying!”

He added: “We were recording The Masked Singer at the same time as I just started recording the last series of the talk show.

“When Kylie was a guest recently, I did question whether she could in fact be one of The Masked Singers.

“She was looking at me. I thought, ‘Are you trying to send me a signal?’ But I think she was just flirting!

“That’s the beauty of the show, it could be anyone under the mask.”

Since the show began fans have seen the likes of Bake Off star Sue Perkins, England manager Glenn Hoddle, Sir Lenny Henry and Spice Girl Mel B take to the stage.

Jonathan added: “The great thing about this show is there are people in there you would think wouldn’t do this show. I mean, I wouldn’t have expected Gloria Hunniford to be on the show this year.

“Without being in any way ageist, she’s an older person and it’s physically quite demanding. I don’t think I would have the energy to do it.

“But she’s out there. She came out in a heavy costume and sang really well. So the surprises are there all the time.

Fans across the country are glued to their TV screens every Saturday night trying to work out which celebrity is behind the wacky costumes.

And with nine characters left, including Panda, Firework and Traffic Cone still to be unmasked, Jonathan has teased that viewers are in for a real shock.

He said: “About five or six people, actually, in their chosen field, couldn’t have been a bigger star. I mean, there are people there who can fill stadiums.

“I won’t give anything away but there are some real shockers.”

It’s not just the calibre of talent on stage that Jonathan thinks is behind the success of the show.

In an age where viewers have unlimited options to choose from, he believes they switch on because The Masked Singer offers real family entertainment.

He said: “Other shows, when there’s a lot of money at stake, even though I like those shows, sometimes they’re quite intense. And if it’s a career defining or career changing experience for someone, then it’s often bittersweet because you might be following one person’s journey and really want them to make it through, and they don’t.

“Whereas here, there’s nothing at stake that way at all.

“Here everyone is taking part because they just want to have fun and they want to give everyone a good time.

“It’s a really welcoming environment, I think, to step away from what’s going on in the world, and go to a place where you know there’s nothing negative.

“There’s enough intensity in the world right now, we just need a laugh and that’s what this show does.” 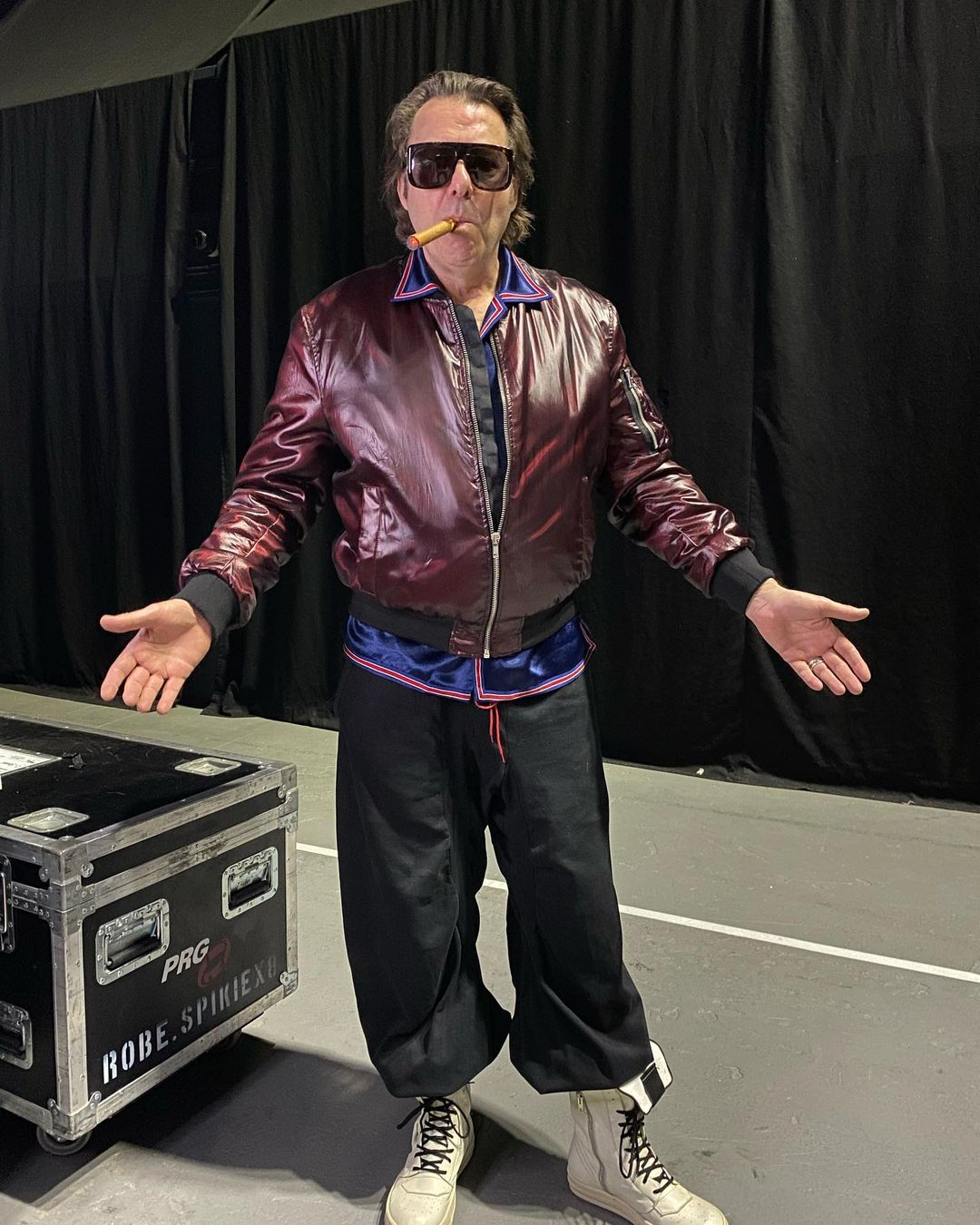 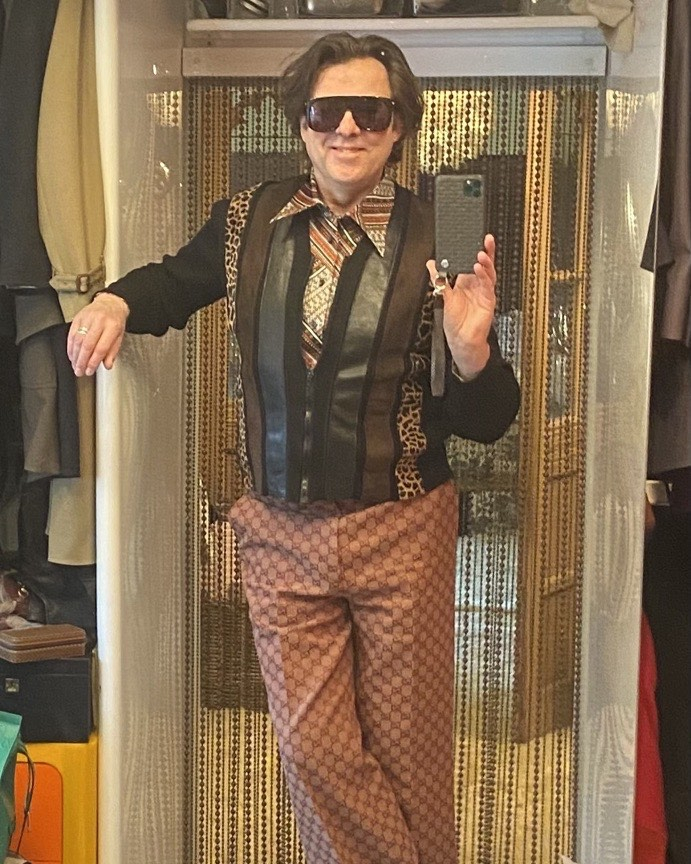