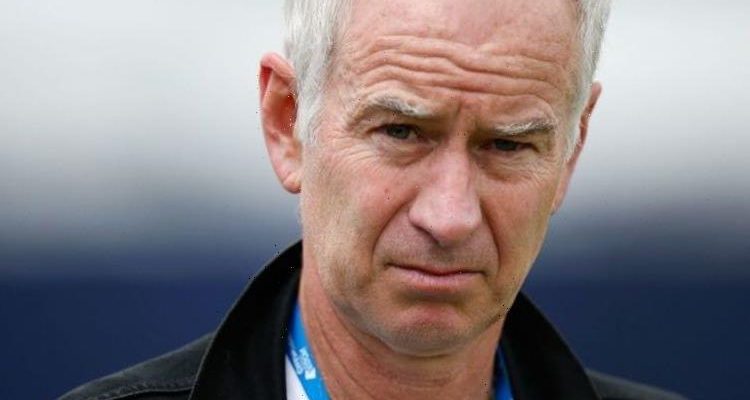 The 62-year-old remains on screens this weekend as the iconic British tennis event Wimbledon nears its conclusion. Both the men’s and women’s finals will be the main spectacle across Saturday and Sunday, with champions crowned for the first time in two years after the event was suspended as a result of the coronavirus pandemic. The fiery American, who won the tournament three times during his illustrious career, is known for his no nonsense analysis of the game, and will be joined by former tennis stars such as Greg Rusedski and Sue Barker behind the mic.

Throughout his playing days, McEnroe became known for his outbursts on court, including the now infamous run-in with a line judge where he bellowed “you cannot be serious”.

But in one swipe, McEnroe criticised the BBC – which has had a longstanding partnership of covering Wimbledon – by questioning the protocols it employs.

Writing in his 2017 book But, Seriously, the star – who also claimed four US open titles – was confused as to why the commentators were not allowed to speak during an actual point.

He wrote: “Holy Moses, I swear it’s more f***ing important than not swearing on air.”

Although he attacked the tradition, McEnroe this week saw himself defended by the broadcaster after he made controversial comments regarding British tennis player Emma Raducanu.

The 18-year-old, who became a surprise hit during the tournament, was forced to retire from her round of 16 match on Monday due to medical reasons.

Reflecting on her decision, McEnroe said: “It’s a shame. I feel bad for Emma. It appears like it just got too much which is understandable.

“It makes you look at the guys and girls who have been around for so long and wonder how they handle it. Hopefully she will learn from this experience.

“Maybe it’s not a shame this has happened right now when she is 18. I played this tournament at 18 and in a way I was happy I lost. I was able to understand what it would take to make it. Allow her to take some deep breaths and maybe get some wildcards.”

But these remarks were attacked by a string of high profile figures including Gary Lineker.

In a statement, the Daily Telegraph reported, the BBC defended the commentator, adding: “John McEnroe offered his personal view on the pressures that tennis players face, based on both his own experience and those of current players.

“He was sympathetic to Emma’s situation.”

McEnroe himself insisted he “felt he said the right thing”, and tackled the subject on BBC Radio 5 Live’s 6-Love-6 show, concluding: “What I said was exactly what I felt.

“I actually felt that I said the right thing. Some people disagreed with it. Didn’t she say the occasion got to her?”

In his book, McEnroe also condemned another Wimbledon tradition – bowing to members of the Royal Family.

He wrote: “As for all the bowing and the curtsying – and we’re not just talking about the Queen here, we’re talking about some pretty minor royals – what was that all about?

“This was the class system gone mad, the opposite of a meritocracy where hard work is rewarded and people are respected because they’ve actually done something, not because they’ve been born on the right side of the tracks.

“Who were the performers here? The players, right? So why were they bowing to someone else when they were about to provide the entertainment?

“Those people in the royal box should think about bowing to them.”

The Royal Family has a long established connection to Wimbledon, which started out in 1907, when the Prince of Wales, later known as King George V, and Princess Mary – the Queen’s grandparents – first attended the championships.

Prince George would be asked by George Hillyard, the new secretary of Wimbledon, to serve as the President of the All England Club – which oversees the tournament – and present the trophy to the winners.

By 1910, now-King George was given the role as patron of the club, and since then a member of the Royal Family has continued in that position.

During the Twenties, the affiliation grew with the Queen’s father Albert evening attempting to win the tournament, but reportedly lost “ignominiously in the first round and never entered again.”

Kate, Duchess of Cambridge, is currently the Patron of the All England Club, taking over from Her Majesty in 2016 following her 90th birthday.