“This news has brought me to tears,” Pink writes 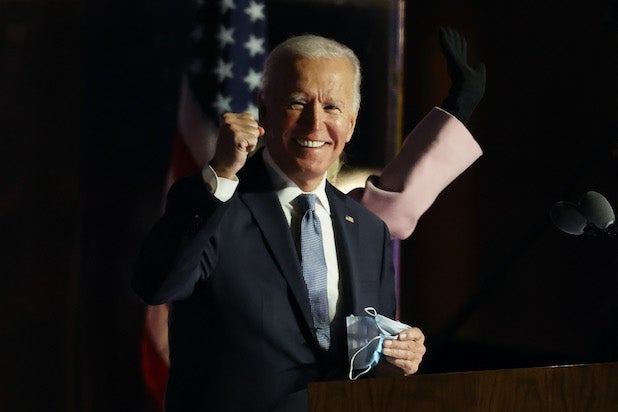 As should come as no surprise, the Hollywood industry is over the moon over Joe Biden winning the 2020 presidential election — even if we had to wait a few extra days to find out.

Reactions began pouring in immediately after Pennsylvania, the state in which Biden was born, was called on Saturday morning in favor of Barack Obama’s former vice president. They were almost overwhelmingly positive.

“The people have spoken!” Kerry Washington tweeted. “Thank you to everyone who used your vote and your voice to make history. PRESIDENT Joe Biden and VICE PRESIDENT Kamala Harris.”

Edward Norton wrote, “I’m actually a little bit shaky with relief. Nothing has made me feel sustained anxiety & dismay for this long other than loved ones being seriously ill. That’s how this felt, except the sick loved one was America & I feel like we just got the news that she’s going to recover.”

See those and others at the bottom of this story.

While Election Night was technically Tuesday, the race for the highest office in America was too close to call. As a matter of fact, at the time, the path appeared to favor incumbent Republican president Donald Trump. But then the mail-in ballots began to be counted in many key states, and most of those votes went to the Democratic challenger.

As the counts continued in key states like George and Pennsylvania, a new story began to emerge — one that showed Biden had the best trajectory to 270 electoral college votes. That’s when Hollywood’s collective depression shifted to optimism — and now, celebration. Once Biden won Pennsylvania’s 20 electoral votes, his total of 273 was enough to finally end the insanity.

For his part, President Trump has blamed Biden’s late surge on “fraud.” That claim has not been substantiated.