“Good to be back!” were the first words from Joe Biden tonight in his first address to a joint session of Congress, sort of.

This probably wasn’t the exuberant address to Congress that the creature of Congress ever thought he’d be giving when the former Vice President first announced he was running again for the top job back in 2019. Yet, on the eve of his 100th day in office, a big government boosting Biden, to paraphrase ex-Defense Secretary Donald Rumsfeld, took to the moment he has been handed, not the one he might have wanted or wished to have.

“In another era when our democracy was tested, Franklin Roosevelt reminded us, in America, we do our part,” Biden proclaimed added the end of the just over one hour speech in a still coronavirus pandemic hobbled nation. “That’s all I’m asking. That we all do our part.”

Seizing the crises of the last few years as an opportunity to take the reins on a historical cycle, Joe Biden was all about doing his part in what a pivotal 99th day in his administration. 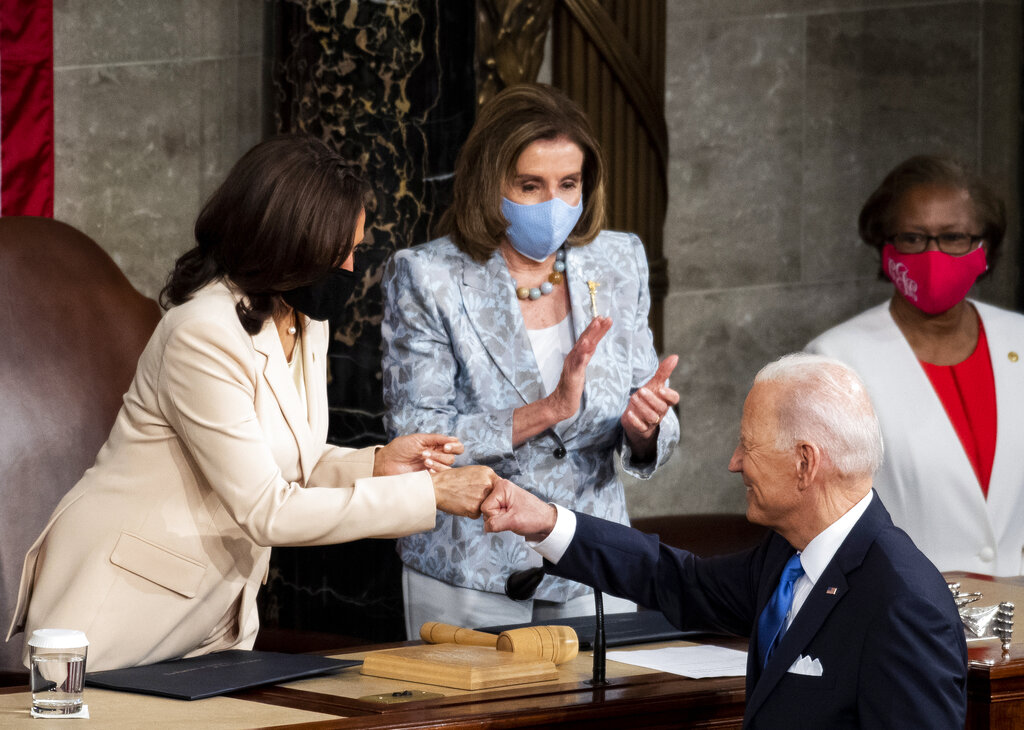 Entering wearing a mask and speaking to sparsely attended and echo filled House of Representatives chamber, the once long serving Senator from Delaware fist bumped with both his former primary rival Bernie Sanders and the GOP’s Rep Liz Cheney as he walked to the podium and its historical occupants of not just America’s first female Speaker of the House, but the first female Vice President of the United States.

Undoubtedly taking the old adage of ‘proper preparation prevents poor performance’ to political heart the past few weeks, the 46th President of the United States today lamented that when he took office “America’s house was on fire” and now declared “I can report to the nation: America is on the move again.”

Adhering to Covid safety protocols in what is admittedly a likely fully vaccinated room, Biden faced a select and socially distanced crowd of 200 on Wednesday. That’s way down from the audience of 1600 that his predecessors have faced for such occasions, but a bit more than a cookout. The maskless Biden spoke before Vice President Kamala Harris, Speaker Nancy Pelosi, First Lady Dr. Jill Biden, Second Gentleman Douglas Emhoff, elected officials, a duo of cabinet members and Chief Justice John Roberts.

One of the last true retail politicians around, the 78-year old Commander in Chief has never been much of a big room orator, even in a scant filled House chamber.

Still, despite a slight return of his well-known stutter, Biden was well versed in his own policy and well-rehearsed for the occasion. The President sold his big big bucks agenda by raising his voice when he had to and leaning in to the camera’s lens when he needed to as much America’s Pops as its President.

Still, stage managed to the nearest media inch, even with a number of ad libs, and with all the hallmarks of an unmentioned victory lap as well as the launching of a crusade, Wednesday’s speech was almost as revolutionary as Ronald Reagan’s first term and the early years of a certain Democrat from Texas.

“He’s like LBJ without the cursing,” MSNBC’s Joy Reid correctly noted earlier in the day. “I’m going to give you government you can see and touch,” Reid added in a summation of the Biden Revolution that is gearing up.

Pushed by the coronavirus pandemic, plus the economic and social crisis’ in the nation, Biden went from openly calling himself as a transition figure during last year’s campaign to the transformative figure of progressive populism we clearly now have in the White House. Once again similar to the 40th POTUS he is ideologically the opposite of, a jobs and paycheck centric Biden embodied the office he occupies, something we haven’t fully seen in decades.

“In our first 100 Days together, we have acted to restore the people’s faith in our democracy to deliver,” he stated with one of many inclinations towards bipartisanship. “We’re vaccinating the nation. We’re creating hundreds of thousands of jobs. We’re delivering real results people can see and feel in their own lives. Opening the doors of opportunity. Guaranteeing fairness and justice. That’s the essence of America. That’s democracy in action.”

Having begun to shift the DC dynamic of the last 40 years in March with the passage of the $1.9 trillion American Rescue Plan through a thread thin and VP enhanced majority in the Senate, Biden has lined up the infrastructure focused American Jobs Plan and the wide ranging American Families Plan next. Coming in at around $2 trillion and $1.8 trillion respectively, the unequivocally ambitious proposals are set to be paid for by a populist and popular tax on the rich.

Orchestrating the creation of the Anti-Trump Administration with a low key leadership style, Biden has had to work hard the past three months to curtail his obvious delight in the pageantry of the Presidency. Making no secret that the Buck Stops with him Biden has sought to steer a wounded, mourning and divided nation out of the pandemic, the resulting economic near collapse, the blunt force of institutional racism and a fraught election that resulted in the horrific attack on the Capitol by MAGA morons on January 6.

Tonight, that phase of the Biden Presidency ended.

Biden’s literally and figuratively blue skies speech took off the training wheels that recent past Democratic Presidents have hampered their progressive instincts with.

Aiming for the Greater Society, so to speak, the man first elected to the Senate when LBJ was still alive, pledged to end cancer as we know it, fix immigration, reinvigorated the fight against violence against women, and tackle discrimination against African Americans, Asian Americans and Pacific Islanders, and LGBTQ Americans. “To all the transgender Americans watching at home – especially the young people who are so brave – I want you to know that your president has your back,” he said in words that no POTUS has ever uttered with such conviction and again another new trick that the old dog has learned since he first became a national figure in the early 1970s.

Unlike his old boss and unmentioned Barack Obama and before him, Bill Clinton, the current Democrat in the White House was as unapologetic in his pitch as a Jed Bartlet or Andrew Shepherd. Sen. Tim Scott may have called it all “a Washington power grab” in his rebuttal for the GOP. Nice line, but the South Carolinian seemed to be fighting a battle that the other army had already planted a flag on and left behind.

Not formally a State of the Union, tonight’s remarks were covered live on all the broadcasters, all the cabler newers, C-SPAN, BBC America, Univision, Telemundo and more.

Of course, as one would expect in a democracy, not everyone was on the same page.

In the immediate moments before the President entered the chamber, Fox News rallied their target market with another attack on his remaining son and Tucker Carlson firing up the conservative base, If that message was missed, the Rupert Murdoch-owned channel had “Other Networks love Joe; Ignore Hunter Scandals” on its lower third of the screen.

More than the other networks love Joe.

Bolstered by strong poll numbers, Biden has a lot of love from increasingly vaccinated and employed Americans right now and he clearly wanted to use tonight to turn that into political muscle before next year’s midterms.

In a call to arms and action speech about “winning the 21st century,” ex-legislator Biden praised the assembled and absent “all of you” for helping to turn things around from the chaos and reality denying of the previous administration. Even Texas’ perpetual presidential hopeful and sometimes sleepy Ted Cruz stood and applauded Biden’s call for more Americans to get vaccinated. Though as soon as he was on Fox, Cruz typically raged against the “radicals and socialism” of Biden’s speech.

Tomorrow Biden will hit the road in the traditional sales jobs following such a speech, including a visit to the political King’s Landing of Georgia. However, that’s for Thursday. Often mocked during the Obama years for his gaffes and long winded remarks, tonight Joe Biden was in his element, literally. After the speech was over, Biden hung back for a while chatting with members of both parties and clearly relishing it – which should tell you everything you need to know.

In that context, tonight’s address to select members of Congress may not have been the speech Joe Biden thought just 18 months would be the one he would deliver if elected. However, in a world that has changed dramatically, it was the one America may have wanted to hear.