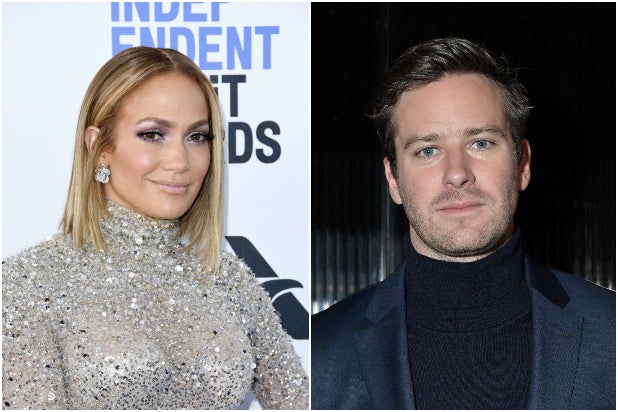 Jennifer Lopez and Armie Hammer will march down the aisle for an action comedy at Lionsgate called “Shotgun Wedding,” the studio announced Tuesday.

Ryan Reynolds was originally reported to be starring in “Shotgun Wedding,” but he’ll remain on as an executive producer for the film that’s directed by Jason Moore.

Lopez and Hammer will play a couple hosting a destination wedding while hosting their lovable but opinionated families, only for the couple to get cold feet and for the entire wedding party to be taken hostage, forcing the couple to save their loved ones before they get at each other’s throats. Mark Hammer and Liz Meriwether wrote the screenplay.

Mandeville’s Todd Lieberman and David Hoberman are producing “Shotgun Wedding,” and they’ll be joined by Lopez, who will produce through her Nuyorican Productions with Elaine Goldsmith-Thomas and Benny Medina.

James Myers and Scott O’Brien are overseeing the production for Lionsgate. Production is expected to begin early next year, and “Shotgun Wedding” will be presented to buyers at the upcoming American Film Market.

“Jennifer and Armie’s irresistible magnetism, separately and together, make them the perfect pairing for this action comedy,” Lionsgate’s Erin Westerman said in a statement. “They are both incredibly funny actors that can also deliver on the action, but what sets this movie apart is the way their infectious chemistry commands the screen. You can’t take your eyes off them.”

Lopez last starred in the STX film “Hustlers” and will be seen in another reluctant wedding situation in the rom-com “Marry Me” with Owen Wilson and Maluma. She’ll also star in STX’s crime film “The Godmother” directed by Reed Morano.

Hammer was just seen in the remake of “Rebecca” for Netflix, and he’ll next be seen in “Death on the Nile” for director Kenneth Branagh and “Next Goal Wins” for Taika Waititi.

Moore has directed “Pitch Perfect” and “Sisters” and will next direct Temple Hill’s “Goodbye for Now.”

Lionsgate’s Robert Melnik negotiated the deals on behalf of the studio.