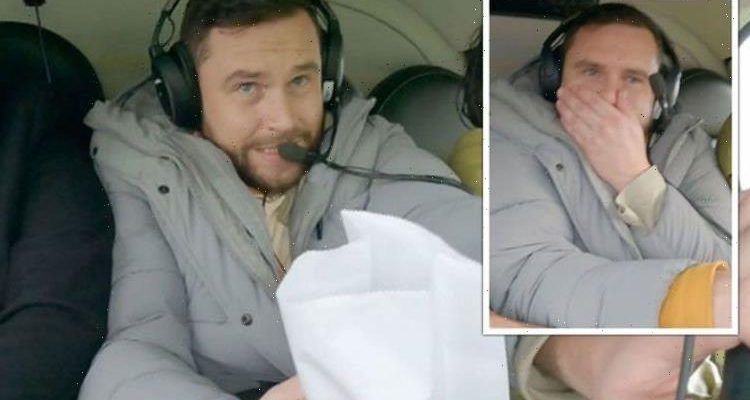 I'm A Celeb: Richard Madeley hints at 'clash' with campmates

I’m A Celebrity…Get Me Out Of Here! is returning to North Wales for another series of the iconic ITV reality show. Emmerdale actor Danny Miller is one of the ten famous faces starring in the series. However, he got off to a rocky start when he needed a sick bag during a “terrifying” helicopter ride.

This year’s celebrities have left their plush homes and luxuries behind to set up camp in Gwrych Castle, Abergele in North Wales.

ITV viewers will get to see the celebrities driven along the scenic Welsh coastline to a house overlooking the sea.

Ahead of the show’s premiere, Louise was the first to arrive followed by Naughty Boy and Snoochie who all greeted each other with a hug.

Danny was the last to arrive, and they immediately all began to wonder where everyone else was.

They then saw a helicopter approaching and tried to figure out what was going to happen on the unpredictable show.

However, Danny made a candid admission to his fellow campmates about his fear of flying.

The Emmerdale star commented: “The idea of getting in that helicopter terrifies the life out of me. The last thing I want to do is be sick all over the celebrities.”

The second helicopter contained David, Kadeena, Arlene and Matty who appeared thrilled to meet each other following their drive to Wales.

But the helicopter movements didn’t go down well with Danny and he firmly held a sick bag in his hand to prepare himself for the worst-case scenario.

While in their helicopter Louise, Naughty Boy, Snoochie and Danny saw a plank over a quarry and they were all scared.

In upcoming scenes, Ant and Dec arrived to join them shortly after their helicopter landed and told them what they would have to endure.

Ant explained: “This year is going to be tougher than ever, all the celebrities will face gruelling challenges on their way to the castle to win the keys to the Castle.”

Dec added: “And you will all face the first challenge, but not as a team.  Instead, you will be going head to head.

Dec continued: “The winning team will get to pick which two celebrities from the other group will represent them in the next challenge.”

Ant explained how the team that wins the keys will have access to the main camp in the Castle, and get will get a bed, a warm fire and have a meal.

“Whilst the losers will be banished to the Castle Clink and be on basic rations. Not the place you want to be,” Ant added.

So which team will be forced to sleep in the Castle Clink?

I’m A Celebrity…Get Me Out Of Here! lands on ITV on Sunday (November 21) at 9pm.