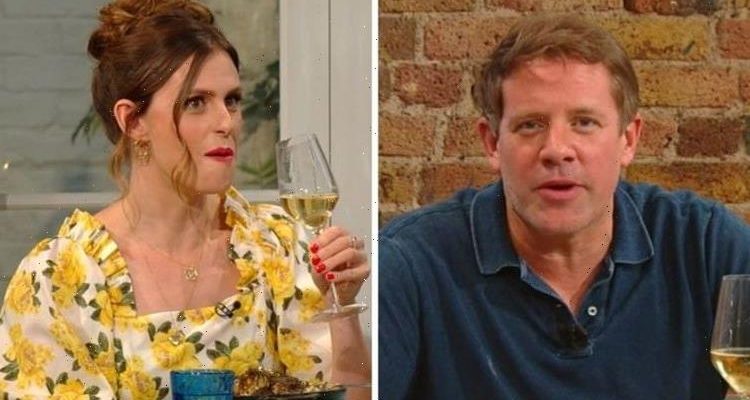 Host of the BBC show Matt Tebbutt asked the 37-year-old what her food heaven and food hell would be, in order for viewers to vote on which dish should be cooked for her. Ellie gagged as she explained her idea of food hell, admitting that she would vomit on the Saturday Kitchen set if she was given it. The cooking and chat show sees Matt cooking up a dish for guests based on what viewers would prefer to see them eating, and this time, unsurprisingly, members of the public voted for Ellie’s food hell.

“Now Ellie, you’ve been here before, you know the score, you’ve been on the show before,” TV chef Matt began. “What’s your idea of food heaven and hell?”

The comedian, who has recently published a book, replied: “Heaven, I would say, is anything pastry based, I love a bit of pastry.

“Sort of cheesy, roasted veggies, tomatoes – that sort of thing. That’s what I want, so please go for that.”

She continued: “And on the other hand, if we go to food hell, I would say just like smoked fish.”

She then made gagging sounds as she went on: “Anything like that, muscles, dill! Oh, I hate dill – I’ve got a vendetta against dill.

“It’s the most pointless herb. So that – I will vomit on set if I get that, just a warning.”

Matt, 47, looked surprised as he laughed. Ellie remarked: “I will, and I stand by that – out of spite I will vomit, okay?”

When it came to the moment of truth, viewers had voted for Ellie to be made her “food hell”.

Before breaking the news, Matt commented: “It could be food hell, because you promised you’d vomit on live TV…

“Where do you think we’re going with this?” Ellie answered: “I think in hindsight, I should have thought about what I was saying. “It’s going to be hell isn’t it?” The chef replied: “It totally is!”

“Oh, no!” The celebrity guest responded. “I need a bucket over here. Oh good Lord.”

The award-winning cook quipped: “Well, if you’re going to set yourself up like that!”

Mortified, Ellie complained: “Oh no, Matt!” He continued: “Apologies for that, but thanks to everyone who voted.”

“Yeah, thanks guys,” Ellie remarked sarcastically. “Thanks a bunch.”

Later, while cooking her food hell dish of smoked fish, Matt said: “Tell us about this hatred of seafood.”

“Smoked salmon, I think, is the most rancid-looking thing in the world… like cold orange fish, who would want that?”

But upon trying Matt’s dish, Ellie was pleasantly surprised. She said: “Oh gosh, I’ll try it. Just as the credits roll, then I’ll vomit.”

But soon added: “Do you know? You can really taste the smokiness and it works! It doesn’t just taste like the sea! That’s quite okay!”

Saturday Kitchen airs weekly at 10am on BBC One.