Is Nini having second thoughts about her future?

On the next episode of High School Musical: The Musical: The Series, which drops Friday on Disney+, Nini (Olivia Rodrigo) goes back to Salt Lake City for a quick trip to visit Ricky (Joshua Bassett) and her friends back at East High. But when a blizzard barrels down on the town, they’re forced to hunker down at the school — just as E.J. (Matt Cornett) receives some bad news. As cabin fever sets in, Miss Jenn (Kate Reinders) drives Nini to the train station so she can return to Y.A.C. (Youth Actors Conservatory) in Denver, where the former Wildcat turns to the drama teacher for advice after having doubts about her place at the new school.

“There are a million things to be grateful for, like so many kids would kill to get into a school like Y.A.C. My moms worked so hard to pay for it, Ricky’s proud and my friends and everyone just…,” Nini trails off in ET’s exclusive sneak peek.

“Honey, all of those people just want you to be happy,” Miss Jenn tells Nini.

“Miss Jenn, when did you realize that Broadway wasn’t your dream anymore?” Nini asks, seeking clarity about her own uncertain future.

“I was at the open call for the original cast of Frozen on Broadway. I was sitting next to a girl who was auditioning for young Elsa. Well, young Elsa was nervous so I was giving her a pep talk and then she threw up all over my sheet music,” Miss Jenn reminisces in a touching moment between the two. “But I realized in that moment that I was more worried about young Elsa than the audition. And I looked down and the only words that were still visible on my music were, ‘Let it go.’ The next day my mother texted me that East High was looking for a new drama and I found a new dream.” 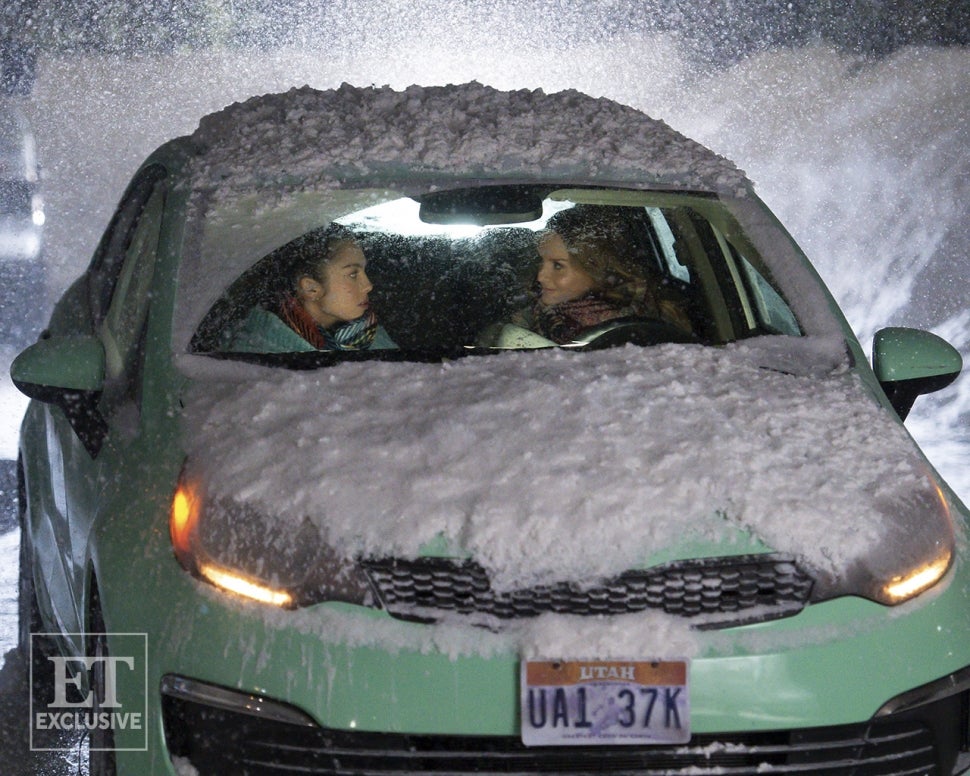 At the start of the season, Rodrigo opened up about her character’s journey in season 2 of HSMTMTS, telling ET that in many ways Nini’s path this year mirrors her own.

“I had a bunch of scenes where I wasn’t with any of my other cast members, or at least the ones that I was used to being with. It was a weird adjustment for me as well. But I think that goes along with the theme of she’s really finding herself, and finding her passions, and finding the people that she feels the most comfortable with,” Rodrigo said. “That’s a really relatable theme, too. That’s something that we all really are doing, and especially me as a teenager. I’m figuring out those things, alongside with Nini.”

So much so that it’s clear Nini, who was a star pupil at East High, is having trouble adjusting to the new environment at Y.A.C.

“It’s strange for anyone, even if you’re not a character in a TV show, to become totally uprooted and be around new people who have different values and who you’re not comfortable with. I think that’s super strange for anyone and it’s definitely an adjustment for Nini,” Rodrigo noted. “She had to sort of weigh the pros and cons of each situation and I’m not going to give any spoilers, but she’s definitely figuring her stuff out.”

To stay up to date on breaking TV news, sign up for ET’s daily newsletter.