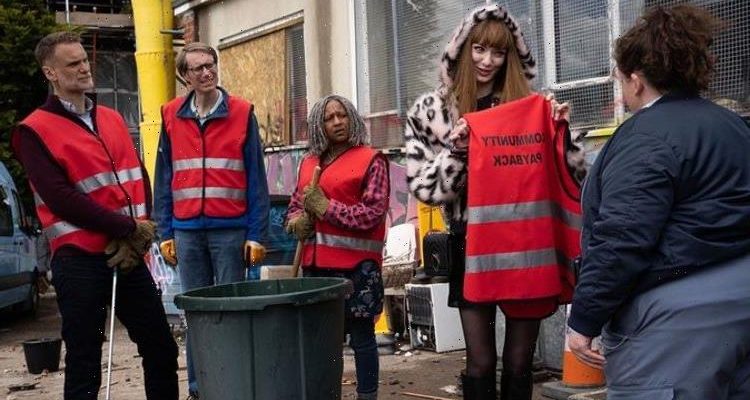 The Outlaws is making its debut on BBC One tonight (October 25) and the TV series follows seven strangers brought together for a common cause. They must all complete community service following their acts of petty crime, but what seems like mundane work soon turns into a chilling adventure. Express.co.uk has all you need to know about how many episodes are in The Outlaws.

The Outlaws is the brainchild of comedian Stephen Merchant and it follows a group of lawbreakers from different walks of life.

They are brought together to help restore a derelict community centre, but one member gets dragged into a dark world of organised crime.

The series is set in Bristol and it celebrates diversity in the city, but also what brings people together in unexpected ways.

Rani (played by Rhianne Barreto) is at the centre of the series and she meets a whole host of quirky characters at the community centre.

The series is made up of six episodes and they are all an hour long, airing weekly from 9pm until 10pm.

After each episode has aired it will be added to BBC iPlayer so those who missed it can catch up.

With this in mind, the second episode will air on Monday, November 1 and so on, with the finale scheduled for November 29.

The good news is the series has already been renewed for a second season, so fans can expect even more drama.

In the first episode, a criminal mistake will unite the strangers in ways they had thought impossible.

When they find a bag full of money at the community centre, they immediately face unforeseen threats.

The series boasts an impressive cast, with the likes of Christopher Walken as Frank and Eleanor Tomlinson as Gabby.

Creator Merchant also stars in the series as the character Greg, and he opened up about his character.

He said: “He’s a lawyer who doesn’t particularly want to be a lawyer and just sort of drifted into that job.

“He’s a divorcee who has got himself in a bit of bother with a lady of the night and finds himself doing community service.

“I always like the idea of the least equipped people getting involved in a crime situation. So Greg is an awkward and geeky guy who’s suddenly involved with gangsters, (always a fun thing to play).

“Greg forms this unlikely bond with Eleanor Tomlinson’s character who is a glamorous, upper-class celebrity.”

For those who are keen to watch the series elsewhere, they will only be able to access it via BBC One and BBC iPlayer.

As the comedy-drama is exclusive to the network, it will not be available on other streaming platforms at this moment in time.

The series has already gained plenty of traction with fans of Merchant keen to see his latest venture on the small screen.

The writer and actor is known for his work on The Office, Extras and Life’s Too Short.

Merchant said the idea for the series came from his parents who worked for Bristol Community Service.

He said: “What was interesting to me was that it was a way of bringing completely disparate groups of people together.

“You could have a random cross-section of society and it was totally legit that they were all there doing community service.

“I was always interested in the idea of that. And finding ways of bringing people together is useful in a TV show.”

He said his mother used to give him anonymous snippets about the kinds of characters who walked through the door.

The Outlaws is airing on Mondays on BBC One at 9pm.