Squid Game might be the most outrageous show on Netflix, but it’s taking the streaming world by storm. For many viewers, the term “Squid Game” is totally new. Despite the show’s very violent premise, people all over the world just can’t get enough of it.

But while no one would actually volunteer to play the version of these childhood games they see in the hit Korean series (at least, I hope no one would), many are still scratching their heads over how the real-life Squid Game is played. Ready to find out for yourself? Here’s how Squid Game IRL works. 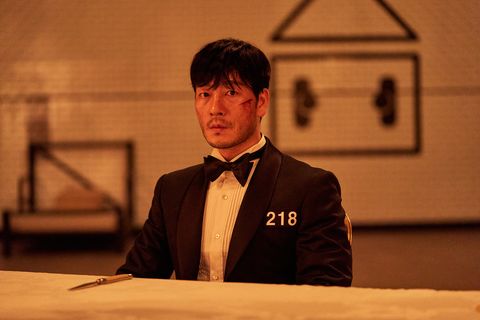 Is Squid Game an actual game?

Yes! The game is totally real and was mostly played in the 1970s and ’80s, according to Netflix. The streamer’s original announcement for the show (which was going to be called Round Six) says “squid game, the literal translation of its Korean name, is a type of tag where offense and defense use a squid-shaped board drawn in the dirt.”

Okay, so what do I need to play Squid Game?

Well, first you’re going to need to draw a special outline. In the show’s first episode, the outline was seen right at the beginning as Seong Gi-hun AKA No. 0456 reveals he played this as a child.

What are the rules for Squid Game?

As Seong Gi-hun explains in the intro:

Based on the video of Seong Gi-hun playing as a child, the kids playing defense are able to push, pull, and basically do whatever is necessary to make sure that the offense doesn’t win. Of course, in the IRL version, you wouldn’t really die. You would just be out of the game. But anything goes in the version that they’re playing in the Netflix series!

How do you know it is time to move to the final battle?

This is the biggest question that most Squid Game viewers seem to have. The rules shared in the series aren’t entirely clear on how this happens, but hopefully we’ll get more clarification as more people rediscover it.