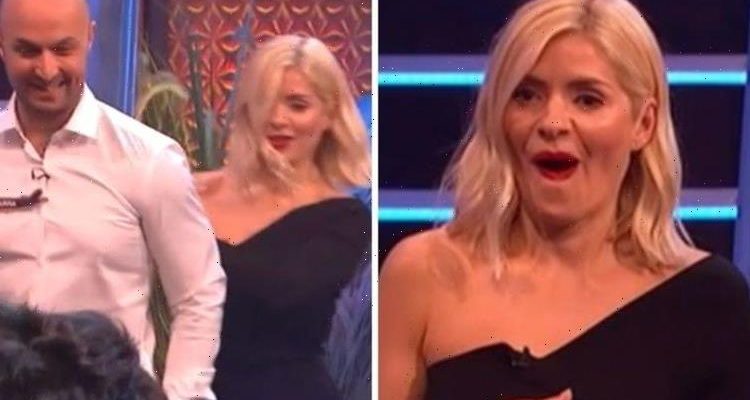 The final episode of Take Off with Bradley and Holly aired on Saturday evening with contestants battling it out to win a holiday. Hosts Holly Willoughby and Bradley Walsh guided players through the BBC game show as they competed for a flight to South Africa. However, before the gameshow had barely begun, poor Holly was forced to hide behind contestant, Aaron and ended up pushing him after a fake gorilla stormed across the set towards her.

The two hosts were presenting the first segment of the show called Guestination when they were introduced to Aaron from Nottingham and Rachel from Swansea.

The idea of Guestination is to guess what country is being represented by a series of objects that spell out the answer.

“I love this game,” Bradley commented as he approached the conveyor belt.

Holly explained: “So, this is our baggage reclaim belt. But today there won’t be any suitcases on it.”

The host continued: “Instead our players will see a series of clues that represent a city from around the world. Show them how it works, Brad.”

Before the contestants had even begun, Bradley gave them a demonstration of what they had to do.

“All you’ve got to do is guess the clue that is coming around,” Bradley explained as he peeked behind the curtain.

“Dave, put your underwear back on,” The Chase host joked. “Here we go. Dave, start the belt.”

As the conveyor belt began to move, Aaron and Rachel were shown three items – the letter K, a gorilla and a one tonne weight.

“Say what you see,” Bradley told them. “What do you think that is, Rachel?”

After trying to help Rachel to guess the correct answer, she finally said: “Cape Town.”

“Come and show us how you got that,” Bradley asked her.

As Rachel approached the conveyor belt, the gorilla bear moved and ran towards her, which took the contestant by surprise.

Despite being taken aback by what had happened, Rachel luckily saw the funny side of the mishap.

Although, poor Holly, who was stood next to Aaron was sent into a panic when the gorilla stormed across the set.

The This Morning host looked so scared she ended up hiding behind Aaron, pushing him towards the gorilla.

“Calm down,” Bradley told the gorilla before Holly finally asked: “Is he just going to sit there?”

After the mishap, the first contestant to guess the destinations was Aaron, who managed to guess three answers correctly.

However, it just wasn’t good enough as Rachel stormed through the round, bagging a holiday to South Africa for her and her family.

Take Off with Bradley and Holly is available to watch on BBC iPlayer.