The highly-anticipated second season of Bridgerton is finally here! Everyone’s favorite gossip gal Lady Whistledown is back as another debutante season begins. And everyone in town can’t wait to read what she has to say as Lord Anthony Bridgerton (Jonathan Bailey) tries to find himself a suitable match. Exciting times!

But while fans are still busy bingeing the latest installment of Netflix and Shondaland’s hit series, some are already wondering if there’s going to be more. Well, you’ve clicked into the right place because we’ve got the answers right here.

Is there going to be a Bridgerton season 3?

Huzzah! Rejoice and be glad because, yes, there will be a season three to this brilliant piece of Regency-era-inspired art. Netflix made the announcement that they’ve greenlit two more seasons of the series back in April 2021, so that would be seasons 3 and 4. So expect a lot more romance and hot goss coming our way.

What’s it going to be about?

So far, the show has been following the original Julia Quinn books in terms of what storylines they follow. If Shondaland continues down this path, then the next love story we’ll be following is gorgeous playboy Benedict Bridgerton’s.

The third book, An Offer From a Gentleman, draws some inspiration from Cinderella. A young woman named Sophia Beckett learns that she is the long-lost daughter of an earl, though she’s been kept a servant by her wicked stepmother. She goes to Lady Bridgerton’s masquerade ball, which is where she meets her “Prince Charming,” Benedict.

No doubt the show’s version of this story will vary in ways and will have its own little twists, jokes, and witty moments. 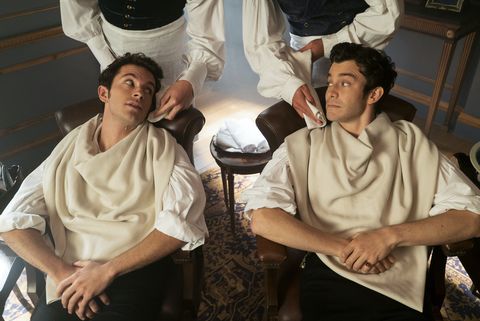 Who’s going to be back on the cast list?

Obviously, if we’re focusing on Benedict’s story, Benedict’s actor Luke Thompson is bound to return. Benedict’s siblings are also likely going to make appearances, especially the younger ones who have yet to find their matches. Like Phoebe Dynevor’s Daphne, Bailey’s Anthony will likely take a step back and not make as many appearances as he did during his season.

Of course, we’re always hoping that Regé-Jean Page reprises his role as the dashing Duke of Hastings. But, alas, that is unlikely. Though nothing is set in stone just yet, so a girl can still dream.

When is season 3 coming out?

Filming for the third season won’t begin until a couple of months from now, so don’t expect anything sooner than 2023. And if we’re going by the same schedule as the first and second seasons, then it should be sometime in the winter.

We’ll keep you posted as soon as we hear anything else! In the meantime, maybe you can rewatch season 1 episode 6… *wink* *wink*