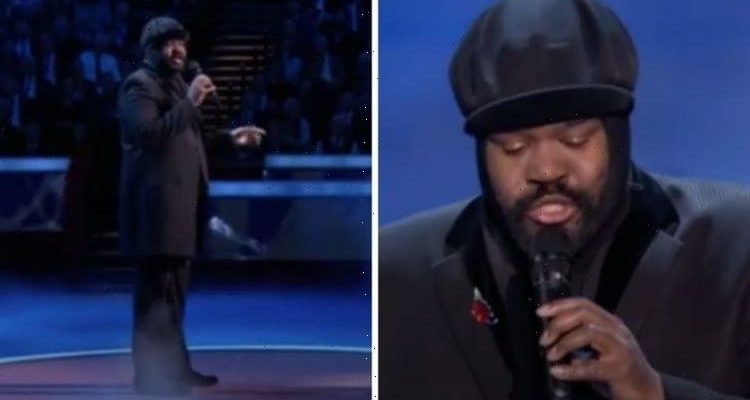 The American singer, 50, appeared on the BBC coverage of the festival to sing The Hollies’ ‘He Ain’t Heavy, He’s My Brother’. But it didn’t take long for people watching at home to rip the performance apart as they ordered the singing to be “stopped”. The commemorative event honours the service and sacrifice made by servicemen and women since the First World War. Unfortunately, several viewers were distracted by Porter’s song.

Taking to Twitter, Paul Challis wrote: “Christ… Gregory Porter has annihilated that… Like a drunk on the Kareoke #HeAintHeavy #FestivalOfRemembrance.”

“I usually like Gregory Porter but either he doesn’t know the tune OR he’s trying to be clever with it – either way it’s hurting my ears! #FestivalOfRemembrance.”

“Good Lord, the music has been poor so far, a more appropriate song choice, but Gregory Porter is butchering this. #FestivalOfRemembrance,” penned Racingfan21.

Dean added: “Gregory Porter… that was the most awful live performance ever.

“A beautiful song ruined, timing was all over the shop. #gregoryporter #FestivalOfRemembrance.”

Andrew Jazzie commented: “Gregory Porter has got a wonderful voice but am afraid he’s just pulverised “He ain’t heavy … he’s my brother”.

“Nobody can come close to Allan Clarke singing that song. #FestivalOfRemembrance #gregoryporter.”

Del Young fumed: “Seriously who chose him to sing this song? Ruined it.”

Gregory’s performance took place in the festival setting at the Royal Albert Hall, where a full audience reflected on various stories and remembrance.

The California-born singer has won five Grammy awards, most recently in 2020 for Best R&B Album.

The Royal British Legion also run the Poppy Appeal, which has raised money for servicemen and women since 1921.

Marking the centenary year, the ceremony opened with Royal Marines drummers getting the service underway as the room was reflected with poppies and the number 100.

A poet then read ‘Alive with Poppies’ as wristbands worn by the audience lit up.

Prince Charles could be seen in the audience along with other members of the Royal Family.

The annual service couldn’t take place on the same scale last year due to the COVID-19 pandemic.

Newsreader Huw Edwards hosted the 2021 programme, and at the start reflected on the struggles of the pandemic.

The 60-year-old has been working for the broadcaster since 1984, and currently presents the BBC News at 10.