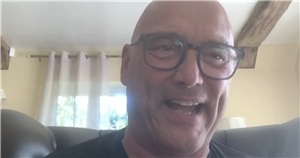 Gregg Wallace has opened up on his incredible four stone weight loss on Steph’s Packed Lunch.

The 56-year-old has undergone a massive health lifestyle overhaul in recent months.

The Masterchef star said that judging the popular cooking show means you have to make sure to stay fit and healthy.

Speaking on the Channel 4 show he said: “The problem occurs later on in the competition when the food gets better and better and you start taking bigger and bigger mouthfuls. It does become an issue.

“There’s no doubt about it – you work with food you just have to work hard.”

He then showed off his muscles and declared: “I’m 57 next month and I look better than I did at 27!”

Gregg went on to explain: “What I’ve learned is it’s nothing to do with diets. I’ve never been on a diet in my life. What it’s about is changing your mindset and changing your bad habits for good ones, bit by bit and not overnight.

“You can’t think on January 1 you’re going to be a completely different person, live like a nun and never have another chocolate biscuit – it’s not gonna happen.

“So the only honest way to do it is to make gradual changes and allow yourself treats.”

He has previously said that he started his fitness journey after doctors told him he could die if he didn’t make some changes.

Gregg said: ”I was scared because my doctor told me that if I didn't change things I was going to die because my cholesterol was so high.

"So, it started there, and then there were a couple of motivating factors along the way. Meeting my beautiful, lovely wife [Anne] who's a lot younger than me. I thought, well she's obviously alright having an old boyfriend, or now an old husband – but there's no reason why she should have to have an old fat husband is there! Honestly, I wanted to be fit and well, I'm 22 years older than her.

"The other one was meeting my PT Danny Rai, who's written the exercise programmes on my website. He really got my mind into a good place. I said to him, 'Listen I'm in my 50s now' and he said, 'You can have the body you want at any age'. I can have a laugh with him, and he never ever gave me any of that scientific stuff – he just made me feel more responsible for myself.”

Get the latest updates on all the things TV and showbiz by signing up to the Daily Star showbiz newsletter.