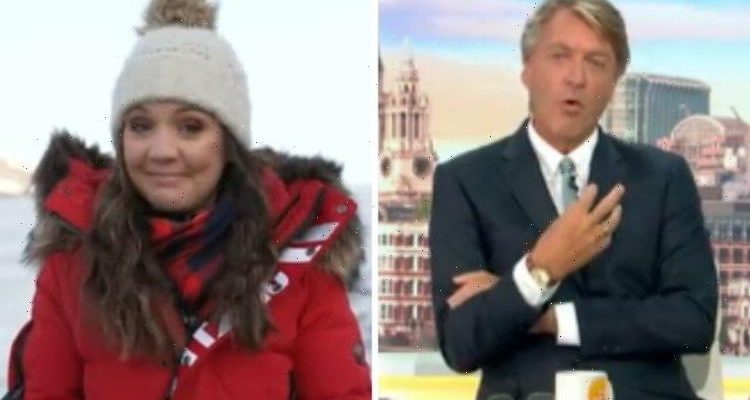 Richard Madeley, 65, often steps in to co-present ITV’s Good Morning Britain. On Monday, fans of the show tuned in to see he and Susanna Reid hosting the show, but it wasn’t long before some decided to stop watching. Many dislike Richard’s interviewing and reporting, with the journalist often accused of interrupting co-hosts while others have grown fond of seeing his “Partridge” moments.

Taking to Twitter, one commented: “When your choices are Richard Madeley and #GMB and @SimonMcCoyTV on #GBNews it’s a no brainier …..it has to be @BBCBreakfast.”

“Not Richard Madeley! Turning off! #gmb,” another penned.

A third person fumed: “You could replace Richard Madeley with the stupidest 12 year old boy you could find and no one would notice the difference. #GMB.”

Others compared the TV presenter to comedy character Alan Partridge.

One posted: “I’ve managed a full 5 minutes of #gmb this morning before Richard Madeley’s permanent Alan Partridge impression has caused me to switch off. He’s an embarrassment and I’ve no idea why GMB continue to bring him on.”

Mirroring this take, one said: “Is there anything more Alan Partridge than Richard Madeley talking about sport? #gmb.”

“Richard Madeley on #gmb , looking forward to lots of classic Partridge moments,” someone else commented.

A different viewer wrote: “Madeley with a classic #AccidentalPartridge this morning. “Blah blah blah climate change… enough about that, what sort of gun does that polar bear guard carry?” #GMB.”

It came as Richard and Susanna spoke to GMB’s meteorologist Laura Tobin, who was reporting live from Svalbard to present facts on the impact of climate change.

While relaying the “devastating” effects of global warming, Laura was met with a response from Richard, who said: “I read to my astonishment a few weeks ago that this summer, for the first time ever, it rained in Greenland.”

He went on: “It never rains in Greenland. It snows. The ice sheet keeps it cold enough that whatever falls out of the clouds comes down as snow.

“It’s interesting isn’t it? That my generation, the boomer generation, were probably the ones who dug their heels in over decades against the whole idea of global warming.

“But there’s simply no denying it now, is there? The evidence is all around us. You’re right there.”

Nodding, Laura replied: “Yes, you’re right. And that is what scientists are now saying.

“They didn’t used to use bigger phrases but it’s now undeniable – the recent climate report came out and they used the word unprecedented six times.”

Good Morning Britain airs daily at 6am on ITV.