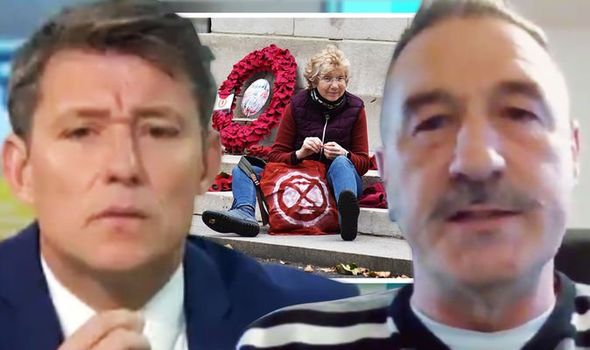 Good Morning Britain welcomed Donald Bell onto the show today to discuss his Extinction Rebellion protest at the Cenotaph during yesterday’s Remembrance Day service. He left both Susanna Reid, Ben Shephard and viewers at home furious with his remark that the service was a “little ritual”.

“The thing is, I’m trying to stop a war. When we have a government that has already agreed, I mean there was a report in June this year on how the government has failed on all but two of the 31 milestones it set itself for red emissions and its failing terribly,” Donald explained.

Susanna replied: “Of course, there is an important point to be made about climate change. It’s a crisis, of course.

“But Remembrance Day is about remembering those who’ve served and lost their lives in our wars.

“It is not about climate change, it’s about a very sacred day of Remembrance.”

“It is about our futures,” Donald replied. “Those soldiers made he ultimate sacrifice for our futures so we could live in peace.

“When we have a government that is ignoring this climate emergency that we are in, their inaction is a crime when they turn up there every year for their little ritual.

“That is a sign of disrespect as far as I’m concerned.”

“What are you referring to as a little ritual?” Susanna asked.

Donald hit back: “Let me finish.”

“Sorry but you just used a phrase that I think will ruffle a few feathers,” Susanna said.

Ben then jumped in: “What was the little ritual you were referring to?

“The Remembrance Service? You describe that as a little ritual?”