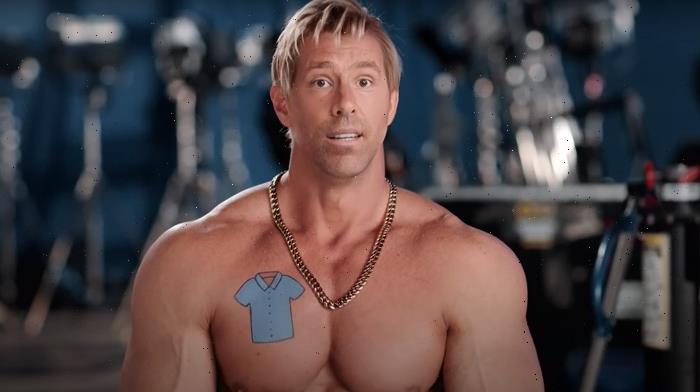 If you ever wanted to see Ryan Reynolds beat the crap out of…Ryan Reynolds…then you’re in luck! In a featurette promoting his new comedy Free Guy, Reynolds gets his butt kicked by “Dude”, a massively muscular version of himself.

In Free Guy, Reynolds plays a bank teller named Guy who discovers he is actually a background player in an open-world video game. He decides to take matters into his own hands and rewrite his life. The problem is that the game’s creator, Antwan (played by Taika Waititi), doesn’t want to give up control. The featurette shows Antwan’s favorite creation, a character named Dude, whose catchphrase is “Catchphrase!” He sends Dude after Guy, which doesn’t go great for Guy.

The featurette pokes a good bit of fun at the lengths actors go to in order to maintain their superhero muscle definition. Reynolds cameos as himself as Dude, talking about drinking “Protein Bombs” made of “100% human muscle” and how he no longer fits into his Deadpool costume. It’s trademark self-aware Reynolds humor. He even makes a joke about how the growth hormones he’s taking made his wife Blake deliver a fully-grown human baby. Weird.

The other thing that’s a little weird is the way they’ve pasted Reynold’s face on an absolutely massive body double. There are moments where the Uncanny Valley is breached and you can see the digital seams. Oh, and what’s with the blue button-down “tattoo”?

A Wild Cast of Characters

This isn’t the first featurette to drop before Fall Guy hits theaters. We’ve also gotten a better glimpse at Waititi’s villainous Antwan in a previous featurette, and 20th Century Fox shared a short clip that introduced Joe Keery and Utkarsh Ambudkar‘s characters, Keys and Mouser. There’s a surrealist tone to all of it, from the horrifyingly hulked-out Dude to Mouser and Keys asking Guy to remove his skin. They also call Guy by his full name, “Blue Shirt Guy”, which might explain Dude’s choice of body art.

All three short videos give audiences a taste of the humor in Free Guy. In an interview with /Film, Reynolds called the film “a fastball of joy.”

Early buzz indicates that Free Guy is a satirical and heartfelt flick that will cheer up even the most skeptical movie-goer. Fall Guy was directed by Shawn Levy who helmed the Night at the Museum franchise. While its release date was pushed back significantly because of the pandemic, Fall Guy will fall into theaters on August 13, 2021.