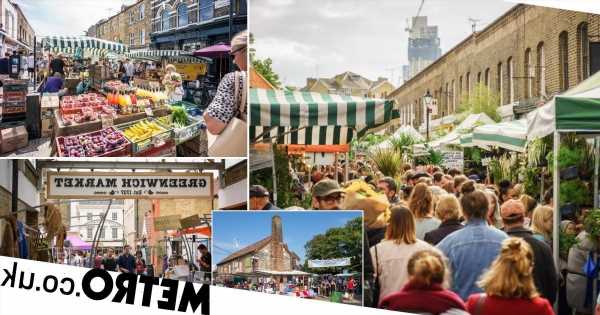 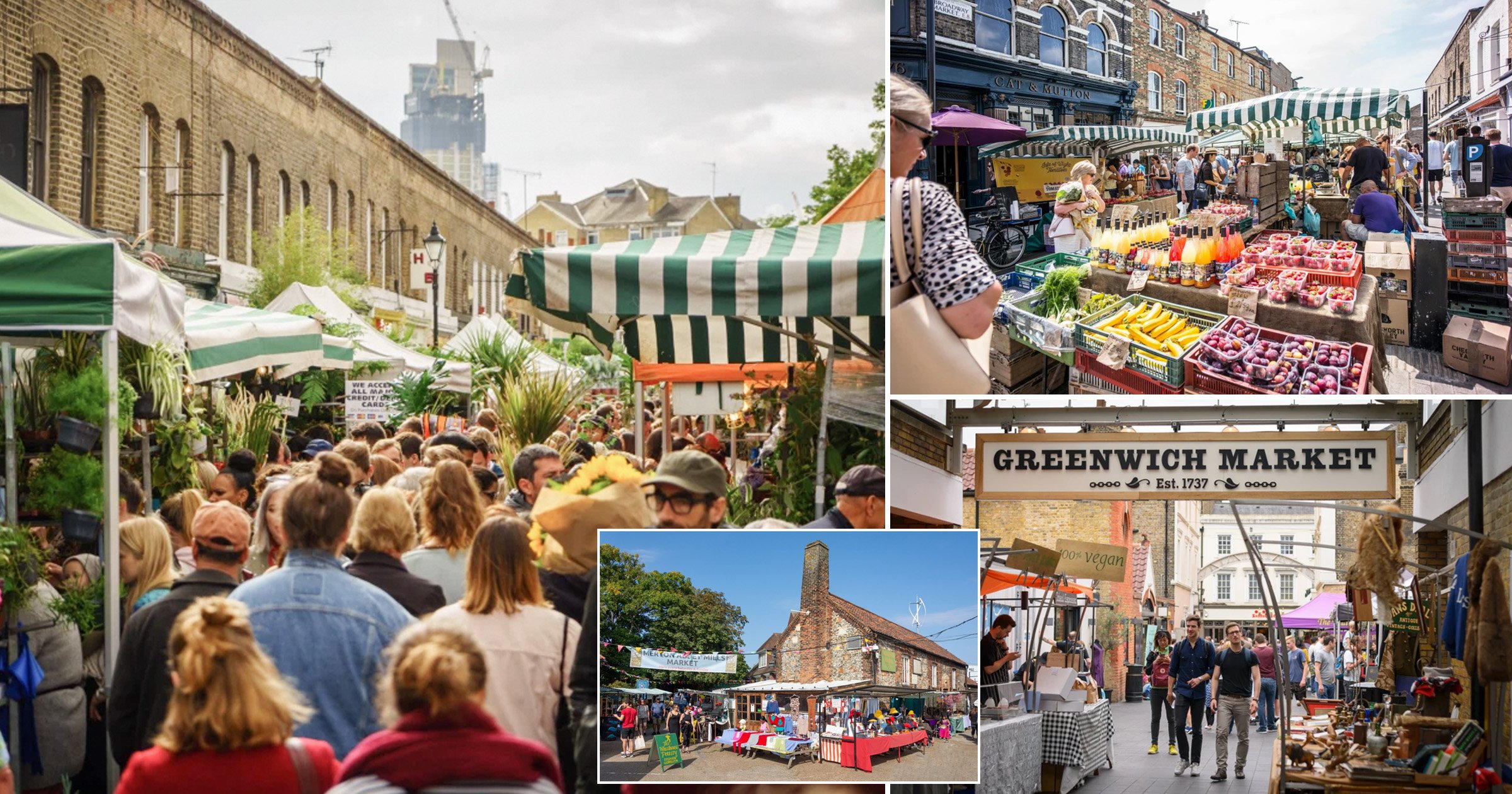 Put simply, a great market gives its neighbourhood heart and soul and makes people want to live there.

From Brixton to Bermondsey and Brick Lane, Petticoat Lane to Portobello Road, once run-down and overlooked places are now desirable hotspots thanks to their fashionable markets – and the cool shops, restaurants and bars that have a habit of springing up around them.

And while a home around most of these established and tourist-friendly markets now costs an absolute arm and a leg, there are other smaller or less well-known options where smart buyers can house hunt, safe in the knowledge that they are buying into what can only be described as an emerging market.

Beloved of hipsters, this almost 140-year-old street market between Hackney and Haggerston has ridden the east London gentrification wave over the past ten years.

Where once it sold cheap fruit, veg and homewares, among the quality staples today you will find culinary treats including speciality olives and handmade pasta.

The street market has enjoyed a real renaissance since the early 2000s and the local property market had been doing the same – until Covid struck and buyers turned their backs on inner-city flats in favour of suburban houses with gardens and WFH space.

But despite Broadway Market’s huge appeal, local property prices are relatively low, thanks partly to the pandemic and partly to the fact that, architecturally, there’s little to write home about.

Most stock is flats in slightly dated blocks, with an average price of £517,000. This represents a drop of 11% in the past two years but a rise of 78% in the past decade, says Savills.

James Marshall, head of the agent’s Victoria Park and Hackney offices, feels the downward trend in prices is likely to reverse over the course of this year.

‘The market is definitely a massive selling point for the area, particularly as there are so many cute little cafés and restaurants around it,’ he says.

‘The start of this year has been really busy in terms of new applicants, both for sales and on the rentals side. I think it is because the city is back up and running again, and life feels like it is returning to normal.’

Walthamstow property has seen strong growth as buyers priced out of Hackney flood in.

These new arrivals have adopted the market – open Tuesday to Saturday and housed in a former cinema – thanks to its interesting mix of antiques dealers, vintage clothes stalls, vinyl specialists, artists and craftspeople.

Another draw is Homies On Donkeys, a Mexican restaurant serving tasty, great-value tacos.

Wood Street is just east of Walthamstow Central, close to the southernmost tip of Epping Forest so it is exceptionally green, although the main drag of Wood Street has got quite a way to go before anyone can start complaining about gentrification.

Around the market are plenty of period terraces, many converted into flats, plus purpose-built blocks.

Average prices inched up 2% during the pandemic, but a resounding 130% in the past decade, says Savills. The average flat will now set you back around £360,000, while you should budget just over £700,000 for a house.

Kenny Goad, director of estate agents The Stow Brothers, says Wood Street is better value than trendy Walthamstow Village, and has other advantages. ‘There is a wider variety of stock,’ he says.

‘You get some really big houses there, so there is more choice, and you are that bit closer to some greenery.’

And while Wood Street has nothing on fashionable Orford Road right now, there are signs it is starting to catch up.

‘A lot of new little cafés are opening up and the shops are changing,’ adds Kenny.

Purists might argue this collection of repurposed printworks buildings beside the River Wandle isn’t technically a market.

But its arty shops, independent cafés and weekend open-air stalls certainly have the same vibe, and there are rich pickings to enjoy here whether you fancy a vegan slider, some amazing sushi, or a classic English afternoon tea.

Other shops sell everything from handmade ceramics to pot plants.

The Mills are just south of Colliers Wood, so there are Northern line Tube links into central London, the City’s close at hand and the National Trust’s lovely Morden Hall Park provides quality green space.

The streets around the mills contain a range of Victorian to 1950s terrace houses and purpose-built flats.

‘We often get enquiries from people who come to the area for the first time because of the market, it is a bit of a destination,’ says Marc Wiehe, director of Winkworth Herne Hill.

Add in ten-minute trains to Victoria, period houses, the expanses of Brockwell Park and Lido plus some great independent restaurants and cafés, and Herne Hill becomes an excellent option for those seeking the true London village experience.

While Herne Hill property isn’t quite as expensive as you’ll find a mile up the road around Brixton Market, it certainly isn’t a budget option. An average flat in the area costs £526,000, says Savills, while you would pay up to £1.3million for a house. Prices have been flat during the pandemic but are up 72% over ten years.

‘I think Herne Hill is a natural progression from Brixton,’ says Marc. ‘When people start to think about starting a family they often want a slightly more quiet, suburban neighbourhood with great schools.’

Property has been hot so far this year, he adds, with a lack of homes for sale pushing buyers and renters alike into offers over the asking price and sealed bid auctions.

Millennials’ fascination with house plants has been great news for this ancient flower market, which has become a Sunday morning place of pilgrimage for those in search of a rare variegated monstera.

Although a lot less hectic than nearby Brick Lane, the street is lined with cute cafés and gift shops, while Haggerston Park is just to the north and the bars of Shoreditch are within walking distance.

The agent’s James Marshall says the popularity of the flower market has put surrounding streets on the map. ‘Everybody knows where it is now,’ he says.

Homes are about ten% cheaper than in Shoreditch to the south and 20% less than Islington to the north – suggesting there is room for prices to keep rising.

Sandwiched between the Thames and Greenwich Park, the centre of Greenwich was an early iteration of a London village, with its beautiful, leafy streets of Georgian townhouses, solid Victorian terraces and waterfront flats.

Great transport links, with Docklands Light Railway, main line and Jubilee line services to choose from, plus green space and good schools mean it’s not a bargain basement option. However, Covid appears to have given Greenwich’s property fortunes a shot in the arm.

There has been a market in Greenwich for hundreds of years and these days, every day from Tuesday until Sunday, dozens of traders set up stalls selling everything from vintage bus destination signs to ramen burgers, to handmade wooden toys.

Critics may call it a bit of a tourist trap, while traders have complained about hugely increased rents in recent years. But the market is very cute, always buzzing – and it certainly adds atmosphere to the good looks of this Unesco World Heritage Site location.

The reality of living close to one of London’s biggest, busiest markets has its ups and downs, according to Nell Mead, who moved a few streets away from the mammoth Camden Market just over a year ago.

‘It is noisy,’ says Nell, pictured above with her rescue dog, Feta.

‘You definitely need good double glazing, because as well as the market there are sirens going all day and night, and drunk people in the road.’

The other issue is the enormous volumes of rubbish the market generates, which overwhelm the efforts of local street cleaners.

‘It is pretty filthy,’ adds Nell, a physiotherapist. She is based in Liverpool Street and chose Camden partly because of its good transport links. And, practical issues aside, she is thoroughly enjoying living so close to one of the capital’s biggest tourist attractions.

‘The vibe is great,’ she says. ‘There is always a buzz, and it feels very friendly most of the time. There is always someone to chat to, especially if you’ve got a dog.

‘Like every urban area it has got its problems, but there are really great pubs and restaurants, and I like going for a wander around the Stables Market.

‘In the summertime it is also lovely to walk down by the lock, because everyone seems so happy and relaxed.