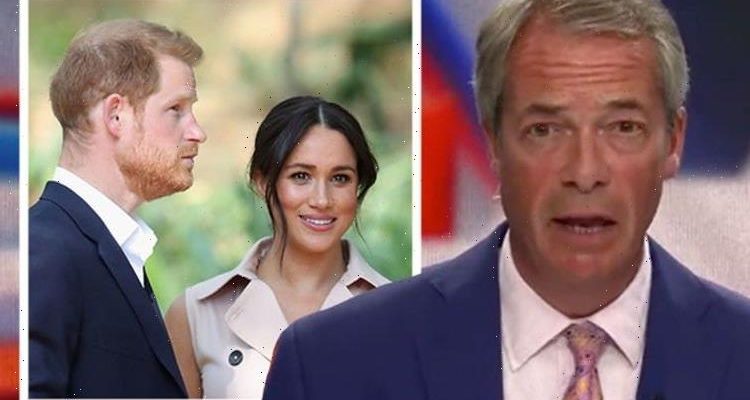 Nigel Farage cuts off reporter and apologises for foul language

Farage, 57, was on hand to host another edition of his programme having made his debut on GB News on Monday evening and he spoke about a number of topical matters. With Prince Harry, 36, having announced overnight he would be releasing his personal memoirs about being a member of the Royal Family, the former politician couldn’t help but bring up the matter. However, in doing so, he brought in Meghan Markle, 39, and lost it over his views on the Sussexes.

In a segment Farage calls, What The Farage, the broadcaster stated his grievance of the day was with Prince Harry’s news.

After telling viewers the basis of the latest development to emerge from the couple’s lives, the former politician went into a vicious rant.

“I feel sorry for the Queen and he has put her in the most awful position,” the presenter said before declaring he was “sick to death” about hearing about them.

“[They must] have a dreadful life living in their mansion and making the most of it. I’m bored to the back teeth of it.”

Speaking directly to American viewers, he concluded: “They’re yours, not ours, and you can keep them because, frankly, I don’t think the British public want them.”

Prince Harry announced earlier this week he would be releasing a tell-all memoir next year and it has caused controversy across the world.

With the fallout of his interview with Oprah Winfrey, 67, continuing to cause shockwaves, many are wondering what else will emerge.

As well as touching upon his life as a senior member of the Royal Family, he will also talk about serving in the military and marrying Meghan.

Now as a father of two, he will also discuss how his children have had a huge impact on his life going forward.

In a statement, the Duke of Sussex said: “I’m writing this not as the prince I was born but as the man I have become.

“I’ve worn many hats over the years, both literally and figuratively, and my hope is that in telling my story.

“The highs and lows, the mistakes, the lessons learned – I can help show that no matter where we come from, we have more in common than we think.

“I’m deeply grateful for the opportunity to share what I’ve learned over the course of my life so far and excited for people to read a firsthand account of my life that’s accurate and wholly truthful,” he explained.

Farage was criticised earlier this year for comments he made about the Duke and Duchess following the death of Prince Philip.

Speaking on US television with the Fox and Friends programme, the former politician addressed the Oprah interview in relation to the Duke of Edinburgh’s passing.

“It was well known that Philip only had a few weeks to live and yet despite that, despite the fact the Queen must have been in a state of deep distress, they proceeded to do an interview at which they attacked, effectively, the older members of the Royal Family.

“Given that today is the day that Philip has died, I won’t use the words about Meghan and Harry that I would like to, but I think it was deeply disrespectful.”

“When people realise, as I have just said to you, that it was known for the last many weeks that he was at death’s door,” Farage continued.

“When people realise that Meghan and Harry went ahead with that interview regardless, throwing around unjustified allegations, I have a feeling public opinion in terms of Meghan and Harry is going to go down very, very fast,” he added.

Some viewers hit back over his comments, with one writing: “Let me make it more simple, It’s none of his business.”

Another posted: “He probably also blames Harry and Meghan for the fact that he’s never been an elected MP.”