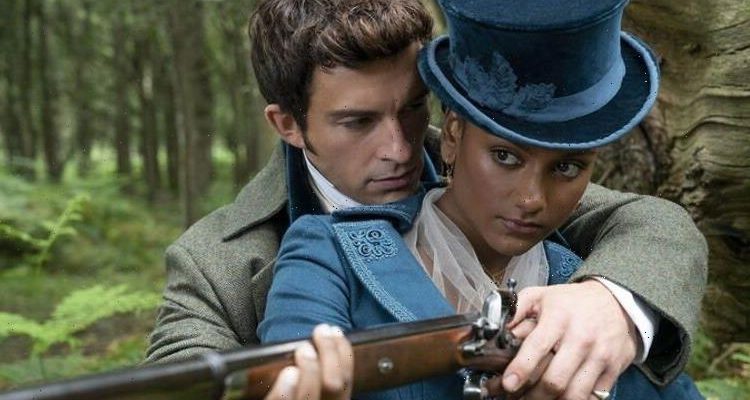 Bridgerton’s second outing arrives on Netflix on March 25 and the raunchy period TV drama kicks off with a new social season. The attention turns to Anthony Bridgerton (played by Jonathan Bailey), as he puts measures in place to find the most practical wife. Dating experts Hayley Quinn and Alex Mellor-Brook spoke exclusively to Express.co.uk about the drama that could ensue.

With the Duke (Regé-Jean Page) and Duchess of Hastings (Phoebe Dynevor) happily married and starting a new family, Viscount Anthony feels he must get back on the courting scene.

As part of his duty to take care of his family, he hopes to find a wife who shares his no-love-strings-attached view to marriage.

Just as he thinks he is out of luck, the young and beautiful Edwina Sharma (Charithra Chandran) walks into his life.

She is the definition of the perfect compliant wife, but her spinster sister Kate (Simone Ashley) is a more likely match.

She said Anthony is “an emotionally closed off playboy” who is “seeking a wife out of duty, emotionally stunted after the death of his father”.

Fans will learn more about the Viscount’s relationship with his father in upcoming scenes.

Hayley said: “Initially, he seems to be thrown towards the naive Edwina Sharma.

“Edwina seems to be a hopeless romantic, guarded by her savvier, sharper sister Kate.

“The trailer suggests Kate struggles to put her unexpected attraction to Anthony to one side, and allow him to marry her sister.

“Anthony may start off as a quintessential Casanova trying to do the ‘right’ thing by choosing a sensible life, but as the plot unfolds we could expect him to reconnect with his emotional vulnerability after meeting Kate, a woman who challenges him for real.”

She compared Anthony to Mr Darcy from Pride and Prejudice, describing him as “a confirmed bachelor realising he needs a smart woman in his life and striving for a committed relationship he may have once feared”.

She continued: “However, this season has the added twist that this is in fact the sister of the woman he’s supposed to marry.

“Expect some heartbreak here, and for all three main characters to change what they think love is all about.”

DON’T MISS…
What happened to Siena Rosso in Bridgerton? [EXPLAINER]
Bridgerton’s Jonathan Bailey details wardrobe malfunction ‘I screamed’ [INTERVIEW]
Bridgerton’s Eloise may not get her own series [INSIGHT]

Anthony feels the pressure of finding a bride to produce an heir.

The pressure of becoming a Viscount after the death of his father led Anthony to subdue his emotions.

Alex Mellor-Brook, a dating expert at Select Personal Introductions, explained: “He is going to focus on finding a wife that is suitable for his family and its future rather than a person to love, which means he will not be making a decision based on his emotions.

“Whilst identifying Edwina as a suitable candidate he soon realises that he must approach her older, overprotective sister, Kate, if he wants to court Edwina.

“In his attempt to placate Kate, so that she is more open to his advances on Edwina, chemistry is created between the two of them.

“Even though there is an obvious romantic connection between Edwina and Anthony, it is clear that there is also simmering affection and lust between Anthony and Kate.

“There is a sense of ‘danger’ that all will be exposed due to the sexual tension and exchanges between these three characters, from the intense eye contact, the challenging conversations which creates an almost ‘playing hard to get’ response, the electricity when they get close to each other, how they brush past one another with a touch or stroke of the hand.

“These are all big indicators that you have an intense desire for someone.”

He said fans can expect some “intensely intimate scenes” between the pair.

He added: “The moment we see Anthony’s gaze drawn away from Edwina and towards Kate indicates that his feelings are being diverted away. There is a sense of pure lust that will eventually boil over and consume both of them. What effect will it have on them both and if their sense of duty will be strong enough to overcome this infatuation is yet to be played out.

“This struggle with loyalty, lust, duty and sexual intoxication will be what drives this love triangle forward and keep us on the edge of our seats.”