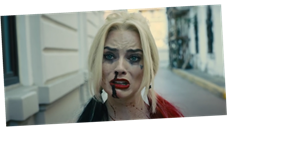 The Suicide Squad trailer dropped and it’s full of surprises, including some characters. The James Gunn-directed film comes out this summer and will serve as a standalone sequel to the 2016 Suicide Squad. That basically means that it’s a sequel but if you didn’t see the first movie, you can watch this one without getting confused.

They may seem like the same movie, but this one has a “the” in the title and the other one doesn’t. So, you see… they’re actually v different. One of the biggest differences is that some stars from the first movie aren’t in this one like Will Smith and Jared Leto. But, we get some new additions like Idris Elba and Pete Davidson (srsly).

Why hello, Mr. Elba. Um, I mean Bloodsport. Sorry, I got a bit distracted by the idea of seeing Idris Elba on my screen for hours. If you’re familiar with DC canon then you know Bloodsport shot Superman with a Kryptonite bullet. So, he’s def a bad guy.

Fun fact: He was originally cast to replace Will Smith as Deadshot, but then they gave him his own character.

Does Harley even need an introduction? The supervillainess has been in the first Suicide Squad, Birds of Prey, and now is one of the lead The Suicide Squad characters.

John Cena is an action movie pro, amirite? He plays a killer who wants peace. He has a heart of gold, kinda (ok, not really).

Rick Flag is back, but this time with a little flair! He’s more light-hearted in this movie than he was in the first. Even villains need some comedic relief, ya know?

The great Sylvester Stallone voices a man-eating fish-human hybrid. There’s really not much else I can say about that one.

Viola is the *boss* as the director of A.R.G.U.S., who runs the Task Force X program.

Captain Boomerang is a bit… unhinged. He’s a total thief, but he has a mesmerizing Australian accent, so we’ll let him get away with it.

And let’s not forget about Blackguard, played by none other than Pete Davidson, Polka-Dot Man (David Dastmalchian), Weasel (Sean Gunn), Thinker (Peter Capaldi), and a bunch more. To see them all, just watch the movie, k? It looks like it’s gonna be really good.

The Suicide Squad hits theaters and HBO Max on August 6.

You love all the deets on movies. So do we! Let’s overanalyze them together.