Eric Nichols has declared that he is single on his latest social media post and fans are wondering what happened to his girlfriend 90 Day Fiance star Larissa Lima and if they’re broken up for good.

Eric posted a thirst trap for his fans on Instagram on Sunday.

In the picture, he poses shirtless for a selfie.

“Happy Sunday! Reach me on my Onlyfans. Single N red-e 2 mingle* Link in bio,” he wrote in the caption.

Fans are alarmed that he claims to be single because he and Larissa had recently gotten back together. The two even bought a house together in Colorado Springs. 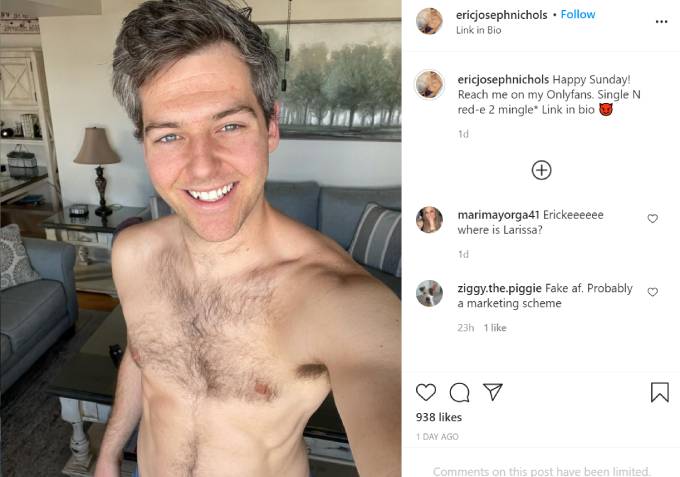 “What the… did I miss something? Single??” one fan asked.

“Single? What happened to Larissa?” another questioned.

“Ok what’s up with you and Larissa??? Give us an update!!!” a third exclaimed.

Some have been lamenting the alleged end of his and Larissa’s relationship.

“I miss seeing your posts with Larissa,” one fan wrote.

“Where is Larissa? I know you guys are still together! No way you two have split up! No way!” a third asked.

“Ladies, ladies. We’ve seen him on and off with Larissa,” one fan commented. “Give him at least a few months to confirm he’s actually single for real this time. Lol.”

Larissa removes him from her social media

Larissa’s social media seems to back the claims that she and Eric are broken up.

She recently removed all of the pictures of Eric from her Instagram.

“Sometimes you have to be your own hype girl,” she wrote in the caption. “Literally hype yourself up every day. Wake up with an I’m the s*** attitude. Because it doesn’t matter if no one else believes in you – believing in yourself is all it takes.” 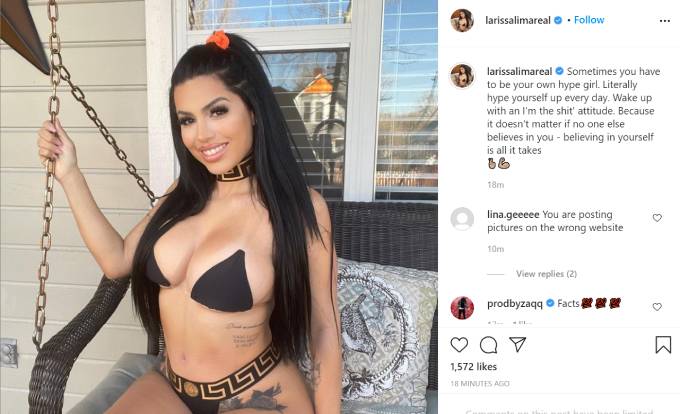 If the two really have split, it is likely that he and Larissa will still live together in Colorado but carry on their single lives separately.

Eric entered the picture after Larissa and her ex-husband Colt Johnson got divorced.

Larissa began dating Eric and often boasted that he was a much better match for her than Colt.

However, the couple split not too long after. After unsuccessful attempts of dating around, she got back together with Eric and moved in with him after her friend kicked her out.

While the two quarreled quite often about what happened when they were broken up and what he said about her, the two salvaged their relationship and bought a house together in Colorado Springs.