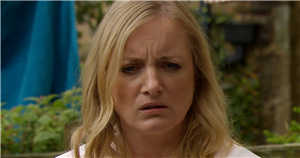 After a turbulent few weeks, Naomi Harris has been settling nicely in Emmerdale with the help of her brother Ethan and dad, Charles.

And things could also be heating up for her as unexpected romance seems to be brewing between herself and hunky farmer Nate Robinson.

But things could possibly take an unlikely turn when Nicola King seems to recognise her as one of the girls from her vicious attack which took place in June.

Next week, Nate and Naomi flirt as they continue to enjoy each other's company and when Ethan and Marcus invite them to a barbecue that night, they both agree to casually tag along. Due to the fact that Naomi is set to stay in the village for quite some time, Charles puts her name forward for work at the village cafe.

Elsewhere Manpreet is secretly filled with dread when Charles persuades her to attend a barbecue that his daughter will also be attending.

While at the barbecue, Naomi’s annoyed when Charles meddles in her relationship with Nate and the vicar is left feeling rather hurt when she tells him it’s too late for fatherly advice and for them to build a proper relationship.

The niceties of the event soon begins to wear off when Manpreet is forced to put her foot down with Naomi.

Later on in the week, vying for a job at the Cafe, Naomi’s reassured when Amelia gives her advice on how to win Brenda over and Naomi’s surprised when she gets offered a position.

Nate and Naomi’s flirtatious banter continues to grow as he drops her off for her first day at work and Naomi settles well into her new job.

However, Nicola feels petrified when she recognises Naomi’s voice and trainers from the day of her attack.

Was Naomi apart of the awful girl gang who attacked her?