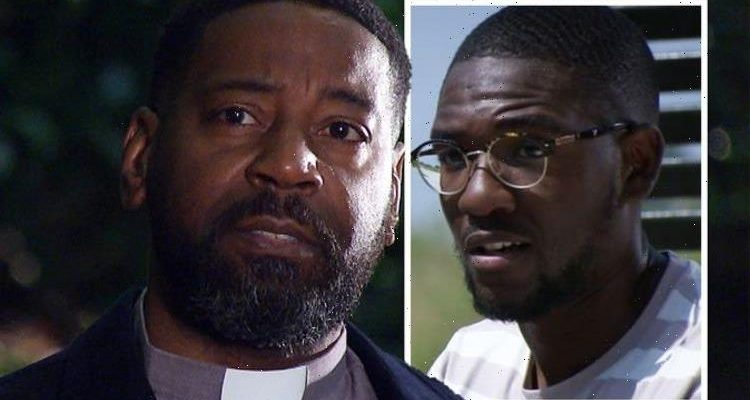 Charles Anderson has been living in Emmerdale for around a year, but very little is known about his past. The vicar moved to the village with his son Ethan Anderson and was shocked to find Manpreet Sharma (Rebecca Sarker) living there. Charles could soon get another blast from the past as a mystery individual arrives. Could this be his ex-wife and Ethan’s real mother?

Official soap spoilers reveal Charles will soon have a secret meeting with someone in the woods.

She sees Charles become visibly shaken after receiving a mysterious message on his phone.

The next day, Charles’ unusual behaviour continues as he anxiously rejects an incoming call.

However, Harriet catches sight of a disturbing message on his phone.

Backed in a corner, Charles initially had no intention of confiding in Harriet about the ongoing harassing texts that he’s been receiving.

But, he’s eventually forced to change his mind when things become too much to bear.

Later on, Charles makes an angry phone call telling his tormentor to stop hounding him.

However, it seems the angry phone call isn’t as effective as he hoped as he later has a covert meeting with the mystery individual in the woods.

Who is the mystery person and why have they rattled Charles so much?

The vicar appears to have a family secret that he’s been keeping very close to his chest.

Emmerdale fans know very little about Charles’ past as he’d not opened up much since arriving in the village.

Regular viewers will know that Manpreet is his ex-fiancée, who jilted him on his wedding day.

But, other than Manpreet, Charles and Ethan don’t have any previous connections to anyone in Emmerdale.

As a result, it seems the person harassing Charles must be someone from his past and there’s a chance that it could be his ex-wife and the mother of his son Ethan.

Could Charles be keeping his ex away from Ethan in a bid to protect him?

If so, she may end up threatening Charles in order to get to her estranged son.

Charles has been going through a challenging time with his son in recent weeks, after discovering the results of his HIV test.

Ethan was distressed, causing his dad to worry, but he later revealed the source of his concerns.

Confiding in his father, Ethan confessed: “I just found out I’m not HIV positive.”

Charles was obviously relieved his son had got the all-clear but sat him down to discuss the matter further.

While they chatted openly, Ethan admitted he’s messed up by having his one-night-stand.

However, Ethan’s admission only made Charles further frustrated and he became evidently angry.

The vicar reminded Ethan he’d carelessly gambled with his life doing something so irresponsible like having unprotected sex during a meaningless one-night-stand.

But, when Charles eventually calmed down he comforted his son by telling him he’s the only thing he had left in his world.

If it turns out Charles is keeping Ethan’s mum away, his relationship with his son could be turned upside down once again.