Marlon (played by Mark Charnock) has been recovering from his stroke in recent months on Emmerdale, with his partner Rhona (Zoë Henry) being at his side the whole time. After she popped the question again a few weeks ago on the ITV soap, her mother, Mary Goskirk (Louise Jameson) set about booking the church for the couple. The date has been set for next month but it seems Paddy Kirk (Dominic Brunt) could have a part to play in the day not panning out how anyone would have expected.

In Wednesday night’s edition of the weeknight serial drama, Marlon and Paddy were sat trying to choose what suit the groom was going to wear.

After Marlon joked his best man was going to have to wear a green suit, he added: “You can’t get married without a best man.”

“No? Well, you better ask him, then,” the village vet remarked, with Rhona’s husband-to-be joking he’d already chosen the right candidate.

“You what? Who?” Paddy asked, with Marlon telling him he had chosen his former stepson Billy Fletcher (Jay Kontzle) to take on the duties. 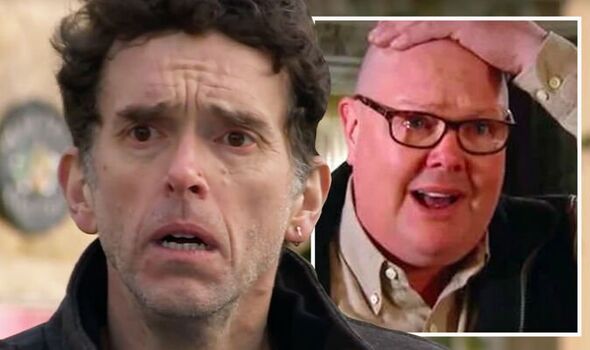 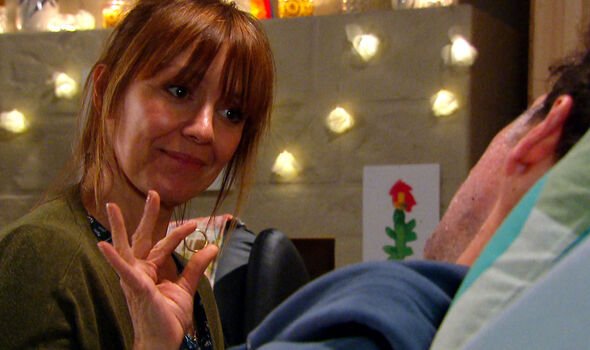 “Billy? Why?” Paddy asked, with Marlon explaining he had become like another son to him since he married his mother, Jessie Dingle (Sandra Marvin).

“All my other marriages ended badly,” he continued, with Paddy becoming more frustrated by the second he hadn’t been chosen.

“What’s that got to do with anything?” the village vet angrily asked, with the Woolpack chef adding: “It was the best man’s fault.”

Paddy has been his best friend’s right-hand man on several wedding days and so Marlon was joking about how the vet was the reason all his marriages had ended.

“He’s cursed,” Marlon joked but Paddy wasn’t seeing the funny side of it as the beloved villager replied: “Cursed? Are you kidding?” 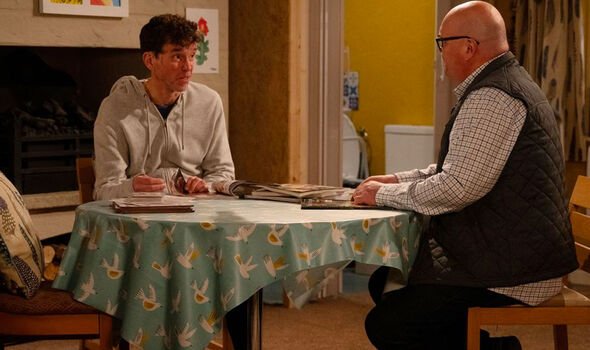 Hitting back at the comments, Paddy told his best friend: “It’s not me that’s cursed, mate. Don’t expect Billy to be any better.

“He’s Jessie’s son and we all know what happened there, don’t we? If you want him, if you really want him, I won’t stand in your way.

“I didn’t want to do it anyway,” he added as he continued to throw his toys out of the pram.

“Didn’t you?” Marlon asked as he continued to prolong the joke for as long as he possibly could, with Paddy replying: “No, it’s too much hassle.”

“So if I asked,” the Woolpack chef went to say but his best friend cut him off as he remarked: “Then I would say no, I might not even be there.” 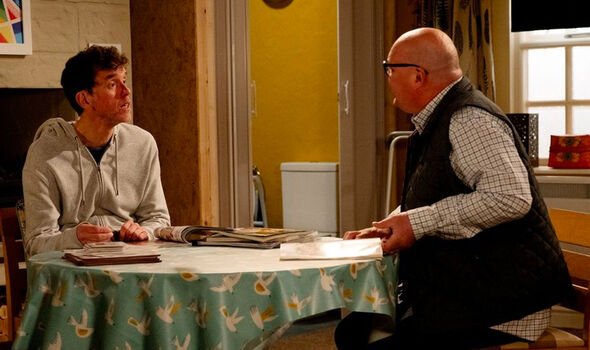 “You don’t want me cursing your ceremony, do you? Probably best if I work that day,” the village vet told Marlon who soon brought the joke to an end.

“Don’t. I didn’t ask Billy, there’s only one best man for me. Will you do it, please?” the Woolpack chef finally asked.

Realising it had all been a joke, Paddy happily accepted the role and preceded to start planning what he was going to do for the Stag Do.

However, it might be there was some sense to what Marlon was saying as it could be Paddy will be a curse for his upcoming wedding.

In the past, the village vet enjoyed a relationship with Rhona and the pair have remained close friends since they parted ways.

With his wife, Chas Dingle (Lucy Pargeter) having an affair with Al Chapman (Michael Wildman), Paddy could begin to miss getting some affection.

As he and Rhona spend more time together working at the vet’s ahead of the wedding, Paddy could end up discovering some old feelings for his best friend’s partner.

Having also missed some affection since Marlon suffered his stroke, Rhona could play on the fact Paddy is flirting with her.

Only, lines could be crossed as the pair end up sharing a kiss after an extremely busy day at the surgery and this could lead to them sleeping together.

Feeling immensely guilty, Rhona would want to tell Marlon the truth but Paddy would tell her to continue with the wedding day.

When it comes to exchanging vows at the alter, Rhona could finally confess her sins as she tells her groom she cheated on him.

At this point, Paddy will have cursed the big day and there would be no way the wedding could go ahead following the betrayal.

With relationships destroyed, it could be there would be no coming back for Rhona and Marlon, with the pair deciding to end their romance.

It is likely Marlon and Paddy would never be friends again and if the chef were to get married, he could enjoy some success without his best friend by his side.

Emmerdale airs weekdays at 7:30pm on ITV, with an hour-long episode airing on Thursdays.