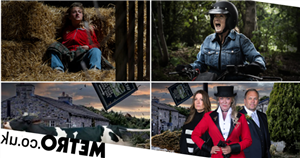 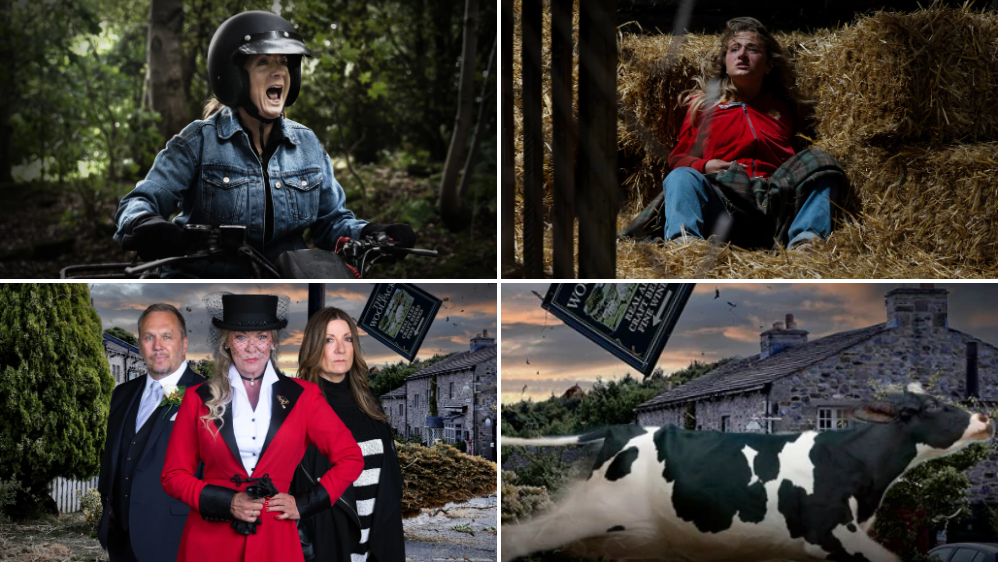 Storm clouds have gathered and the residents of Emmerdale are facing destruction – but who lives, and who dies?

Kim Tate’s (Claire King) wedding to Will Taylor (Dean Andrews) is the setting for unfolding horrors.

Whether or not Kim’s wedding goes smoothly – and if Harriet Finch (Katherine Dow Blyton) survives her wrath – remains to be seen, but soon the focus is elsewhere.

Amelia Spencer (Daisy Campbell) is lost, alone and in labour – and as residents voyage out to save her, they are caught up in deadly winds.

Your full episode guide to the whole massive week is here.

The episode opens on the Emmerdale village with Kim thoughtful as she rides her horse in the beautiful surroundings. We see Moira Barton looking out across her farm land whilst in the village Dawn and Lucas set a red kite off up over the houses.

Up at Home Farm a brooding Will looks pensive ahead of his wedding day. Whilst Priya hurriedly dashes about preparing the wedding,  above her we see that the sky darkens ominously.

Eric Pollard strides out returning from visiting the grave of his deceased wife Val whilst stressed vicar Charles is surprised to spot his bride to be Kim out riding ahead of her wedding day. When Kim eyes Harriet from her horse, it’s clear there’s unfinished business…

At Home Farm, Billy’s worried when Will informs him there may now not be a wedding as he and Kim need to have it out if they’re going to move forward. Kim arrives home and their argument commences.

Will is insistent he doesn’t want to be with Harriet and puts the ball firmly back in Kim’s court. Has he said enough to win back his bride? Before long Kim confronts Harriet who is very surprised to see her. Suddenly Harriet snaps and grabs Kim by the throat.

How will Kim react and what can Kim say or do to get Harriet to back off from her man? Meanwhile, at the Church, the wedding guests get settled ahead of Kim’s arrival. On word her arrival is imminent the guests head outside to see the spectacle of the elegant and magisterial Kim arriving down main street on horseback.

The wedding ceremony commences. After the ceremony, on leaving the church, the wedding party are shocked by the intensity of the wind. Back at Home Farm the wedding celebrations begin. When Lydia arrives and asks for help in the search for Amelia, Kim steps up to saddle her horse ready to go looking for Amelia in the storm.

Amelia prepares for her picnic date with Noah. Later, the wind is really picking up as heavily pregnant Amelia makes her way through the countryside for her date with Noah.

With the force of the wind Amelia is blown about and with her contractions having started she desperately calls her dad for help. Dan panics to get the call, his worry increases when Amelia’s phone dies before she can tell him exactly where she is.

As Amelia heads to find shelter Harriet battles her way in the wind to try and find Amelia and save the day. Before long Lydia arrives at Home Farm to ask for their help in the search for Amelia and it’s Kim who steps up..

Out in the fields and fighting the dangerous conditions, Harriet bombs across the countryside on a quad bike. Elsewhere, Kim is struggling against the elements on her horse when she spots the tyre tracks of Harriet’s quad. She begins to follow Harriet’s path into the woods.

Watching Noah and Amelia share a happy exchange out on Main Street, Sam is resentful and soon argues with his son Samson over his recent behaviour towards Amelia. Chas is angry at Al, blaming him for her not being there for her mum. And Aaron believes his mother is truly done with Al.

Al speaks to Chas and realising it’s over states if he can’t have her, he’s leaving town today. But is that truly the end of it?  It’s still a war between Nicola and Charles after the wedding ceremony, Nicola without a lift to the reception begrudgingly accepts Charles’ offer of a lift.

The storm continues to rage…

A barn at Moira’s farm collapses and the cows escape panicking in the wind they begin to stampede..

Battling through the storm, Dan continues his search for Amelia. Hiding out in a barn and with her contractions continuing, petrified Amelia prays for her and her baby’s safety.

Nicola and Charles stop and survey the abandoned minibus worrying as to where it’s wedding party passengers have gone. When Nicola heads off into the storm to find Jimmy, Charles is left with no choice but to follow her.

Liv chastises her brother Aaron for his decision to leave and Liv storms off, Aaron is left hating what this is doing to them.  When both Kerry and Chas are injured by flying debris in the storm, Al is forced to choose between them. Al rushes to aid Chas watching him Kerry gets a sense something isn’t right.

Aaron does his best to lessen the blow of his decision to leave and Mandy and Vinny exchange a relieved glance as the siblings reconcile. Mandy, Vinny, Liv and Aaron share a special family moment as they hanker away from the storm.

They’re shaken when a dishevelled Paddy arrives with news Chas is in Hospital. Aaron and Paddy set off to see Chas, quickly followed by Liv and Vinny as they set out into the storm to look after Eve at the Woolpack.

Vinny and Liv struggle against the violent storm but are determined to press on.

Charles and Nicola are still antagonistic as they struggle through the wind searching for the wedding party. Spotting a derelict shelter, they head towards it. Naomi and Ethan are anxious as they decide to search for their missing father.

Realising their venture into the storm is a bad idea, Ethan and Naomi are united in their fear for Charles.

Back out in the storm, Charles pushes Nicola to safety when a tree crashes to the ground but her hostility remains. He’s concerned when Nicola starts to have a panic attack…

After abandoning the minibus, the golden ticket wedding guests battle the storm as they search for Home Farm. Determined to be positive for the kids’ sake, Jimmy rallies his demoralised troops.

A loved character is trapped while safety is reached for someone.

Lydia gets the terrible news.

Reaching the end of a panic attack, Nicola is desperate for Charles to not see her so vulnerable. When a concerned Charles reaches out, she allows him to comfort her with a prayer.

Bernice and Diane survey the damage inside the Woolpack.

The sun rises over Emmerdale in the aftermath of the storm. As Diane reassures Pollard that they’ll be able to rebuild, will everyone feel that way?

Elsewhere, someone is left worried by an unfolding situation and grief spreads.

The full devastation in the village is revealed as lives remain in tatters following the tragedy.