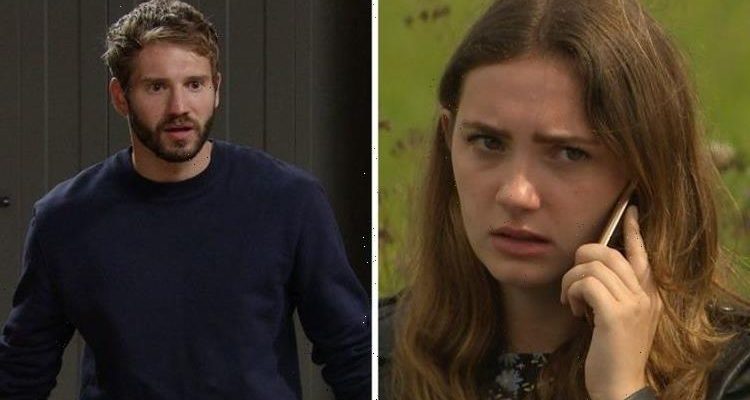 Heavily pregnant Gabby (Rosie Bentham) was frantically calling Jamie (Alex Lincoln), who had agreed to meet her so they could escape the village. But before he did that, the Emmerdale villain met up with his ex, Dawn Taylor (Olivia Bromley). He begged her to give their relationship another go, but Dawn clocked on to what he was doing to Gabby and rejected him. As Kim Tate (Claire King) and Diane Sugden (Elizabeth Estensen) caught up with Gabby and convinced her Jamie was going to run off and leave her, he got distracted by her call while driving and veered off into a river. But could that last phone call hold a key to his fate, which a vengeful Gabby will ignore?

Jamie was hoping he would be able to persuade Dawn to try things again and that they would leave together.

But with Dawn refusing to get mixed up with him again, he decided to flee by himself.

“Gabby thinks she’s going to marry you today and you’re just going along with that?” Dawn asked Jamie.

“Wow, you’re all even madder than I thought,” she added.

Jamie replied: “I don’t want that, I want you. Just say you’ll come with me, please.”

“So you can properly weigh up your options?” Dawn speculated.

She continued: “I say no, and you marry Gabby, take the money and run – plan B.

“Or maybe she is plan A and I’m just the fallback, the whole thing seems completely messed up.”

Jamie went on pleading with her, commenting: “Dawn, all that matters is that I love you.”

“There is a pregnant teenager sat waiting for you at the alter,” Dawn yelled.

But Dawn wouldn’t fall for Jamie’s words and told him to leave.

He finally answered a call to Gabby, agreeing he’d meet her soon, but determinedly drove off, clearly hoping to flee elsewhere.

In the meantime, Kim and Diane tried to convince the teenager not to fall for what Jamie was telling her and guessed he was probably planning on leaving her..

While driving off, Jamie ignored more calls from a desperate Gabby before taking his eyes off the road to reject the next incoming call.

But while doing so, he missed an approaching car and ended up dodging it before his car veered off the road and landed in a river.

Viewers were left wondering if he would survive as the credits rolled, but could Gabby decide to use this as a final act of revenge?

As he slipped while trying to reject the call, Jamie may have answered the call by mistake. If so, Gabby may have heard the crash unfolding.

But as it dawns on her that Jamie has run off to leave her and their unborn child alone, a devastated Gabby might keep the call to herself.

Kim and Dianne both assumed Jamie would run away and stay off the grid, so his disappearance won’t come as a concern.

With nobody searching for him, it’s possible they may not even find out what’s happened to him.

And with Gabby not telling anybody, she could cost Jamie his life by not getting help to him sooner.

Will Jamie be left for dead? And once the news of his accident eventually reaches the village, will Gabby regret her actions?

Jamie has lots of enemies in Emmerdale, but his death will come as a shock and his mum Kim is bound to be upset, even if she had disowned her troubled son.

Could the accident spell the end for the manipulative character?

A heartbroken Gabby would probably go to extreme lengths to get back at Jamie after being left by him, so it’s likely she may not care what has happened to him in the initial moment following the call.

But if Jamie has died, his blood will be on her hands – will the teenager be able to live with it?

Emmerdale continues on Friday at 7pm on ITV.