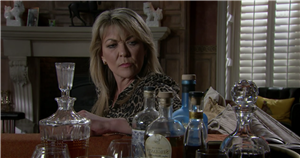 Emmerdale fans have predicted danger for Kim Tate as the penny finally dropped in her mystery poisoning plot.

In Friday's episode, she was given the results of a blood test, which revealed she had benzodiazepines in her system – which she quickly put together as what was causing her memory loss and fainting spells.

She insisted to the nurse who came along to deliver her results that she'd just found some old tablets in the medicine cabinet and had been taking them for stress, but was concerned they'd gone out of date.

But as her cleaner Lydia confirmed that she felt like she'd been "hit by a freight train" after drinking some of Kim's drugged brandy, the pieces fell into place as she scrutinised the bottles on her drinks trolley.

Fans flocked to social media to celebrate the revelation and to share their own theories on how exactly Kim will exact revenge on her mystery poisoner, with one writing: "I do enjoy Kim on the warpath. Monday should be fun!"

Another added: "Kim knows the brandy was spiked – her revenge is just starting!"

As a third wrote: "The truth is finally out for Kim now that she knows her drink has been spiked. Her revenge plan is on."

Later, Kim was at her desk writing invitations for "some cocktails and a nice lunch" tomorrow, when Gabby walked in and quizzed her about what she was up to.

"It is. I have an announcement for you all," Kim explained. "And you're coming too."

She clearly doesn't think Gabby is above suspicion after she admitted to stealing money from the Home Farm accounts – ostensibly to take care of her unborn baby should Kim abandon her after the birth.

Kim is set to invite a whole bunch of guests for dinner next week, including Jai, Will, Gabby, Dawn, Jamie and Al, with the intention of weeding out the poisoner.

She's set to announce she's retiring from the Home Farm business and needs to anoint a successor – and she revels in the chaos that ensues.

Emmerdale Story Producer Sophie Roper added: "Kim’s explosive discovery will send her on a quest for vengeance that will rock the Tate Empire like never before.

"With a traitor in her midst, Kim’s a very dangerous enemy and as the plot to unmask her poisoner thickens, Home Farm will become a hotbed for secrets and lies.

"But as Kim discovers who has committed the ultimate betrayal, will Kim be able to stop them before they stop her…"

Emmerdale airs on weekdays at 7pm on ITV, with an extra helping on Thursdays at 8pm.