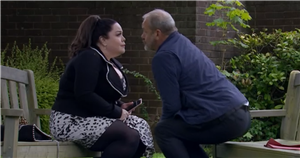 Emmerdale fans were left amused over a "socially distanced" kiss between Jimmy King and Mandy Dingle on Wednesday's episode after the two characters ended up bonding during his tense trial week.

Jimmy (Nick Miles) has been left tense during his court appearances as he waits to hear if he is facing prison after crashing his truck in the village which killed villain Paul Ashdale, played by actor Reece Dinsdale.

On Wednesday's episode, Jimmy was left overwhelmed as Mandy, who was in a romantic relationship with Paul before his death and discovering his evil secrets, supported him.

Mandy insisted that Paul had ruined enough lives and that she didn't want him ruining Jimmy's life as he is a "wonderful" and "good" person, adding: "Jimmy, you're a hero!"

To which Jimmy replied: "And you are just incredible…" as he launched towards her on the benches outside court going to kiss her as the soap immediately went into an advert break.

Fans were left both praising and amused over the scene as it appeared they had used a clever "socially distanced" filming trick amid the coronavirus pandemic, which also had the two characters sitting on separate benches.

One person said: "Well done #Emmerdale as well for that Bubble scene between Jimmy and Mandy," followed by clapping hand emojis.

A different fan put: "#Emmerdale I liked how it showed they were about to kiss then cut to commercials maybe their partners weren't available to do the scenes" followed by laughing emojis.

Yet some soap watchers were disappointed they didn't get to see the kiss in action with a different account adding: "Let's see the kiss, oh you're cutting to adverts. #Emmerdale."

After Jimmy and Mandy's kiss, the character was left feeling guilty as he apologised and asked if they could move on from the unexpected smooch.

Thankfully, the two were able to break apart before Jimmy's estranged wife Nicola (Nicola Wheeler) walked over to the benches due to Jimmy leaving his court appearance with just minutes to spare.

Elsewhere, viewers were left excited over a potential Jimmy and Mandy romance after their kiss as they took to Twitter to share their thoughts.

One person said: "So I’m liking Jimmy and Mandy together , sorry @nicola_wheeler ( we even have the same name) !!! #jandy #emmerdale @emmerdale #jimmyandmandy."

Emmerdale continues on weeknights at 7pm on ITV.