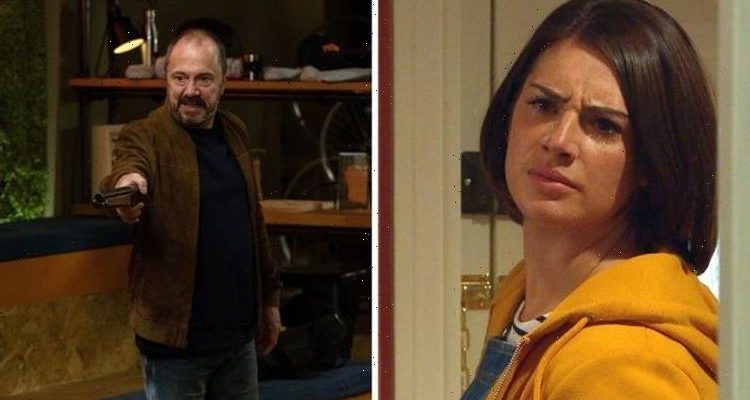 Wendy’s (played by Susan Cookson) violent ex-husband Russ (Rob Jarvis) recently arrived in Emmerdale demanding money from her following his mother’s death. His late mother had left everything in her will to Victoria’s (Isabel Hodgins) baby Harry, and Russ has been pressuring Wendy to give him thousands of pounds. Victoria has no idea about Russ’ scheme to rip off her grandson. However, in an upcoming episode Russ’ patience wears out and he pulls a gun on Wendy and Victoria.

In the ITV soap next week, Victoria will discover the truth behind Russ’ visit to Emmerdale – a truth which could lead to her death.

Russ first admits to Wendy that he is on the run after shooting a policeman during an armed robbery of a jewellery shop.

A horrified Wendy quickly realises her ex-husband is far more dangerous than she had ever imagined.

When Russ demands Wendy to convince Victoria to hand the money over she does, but instantly feels disgusted with herself.

Little does Wendy know what Russ has a plan B in the boot of his car – a sawn-off shotgun.

The next day, Victoria tells Russ he’ll have the money by midday, and he pretends to be overwhelmed with gratitude.

Wendy, compelled by her guilty conscience, arrives at the Hide and urges Victoria not to give Russ any money.

Victoria’s confused by her change of heart, but Wendy decides to tell her how Russ is blackmailing her with a secret that could ruin her life.

Before Wendy can tell Victoria what the hidden secret is, Russ appears demanding answers as to why the money he asked for has not come through.

The two women find themselves trapped and helpless in the clutches of Russ.

When Victoria discovers Russ was willing to blackmail Wendy to rip off his grandson, Harry, she’s disgusted with him.

But when she tries to call the police, Russ reaches into his coat and pulls out the gun.

DON’T MISS…
‘Sick to death of this!’ Pen Farthing slams ’empty seats’ attacks
Where is Vera season 11 filmed? Where is it set?
Janette Manrara mortified over Morning Live accident

An angered Russ secures the door to the hide after taking Victoria and Wendy’s phone off of them, leaving them uncontactable.

The women are terrified to be held hostage by Russ, who then cocks the gun and points to Victoria demanding she transfers the cash to him immediately.

Armed police officers soon arrive on the scene, but as the stand-off escalates a gunshot rings out.

Can Wendy and Victoria be saved, or did the police arrive too late?

In a recent interview with Express.co.uk and other press, Wendy actress Susan Cookson explained how her character will feel in the intense upcoming scenes.

The soap star hinted Wendy will want to do everything she can to protect Victoria from Russ.

She revealed: “I think Wendy sees Victoria as the daughter that she never had.”

But will she really put her life on the line to save the mother of her grandchild?

Wendy could see Victoria’s death as a way to take custody of baby Harry and let Russ shoot the single mother.

Fans will have to tune in to see if Wendy will risk her life to save Victoria.