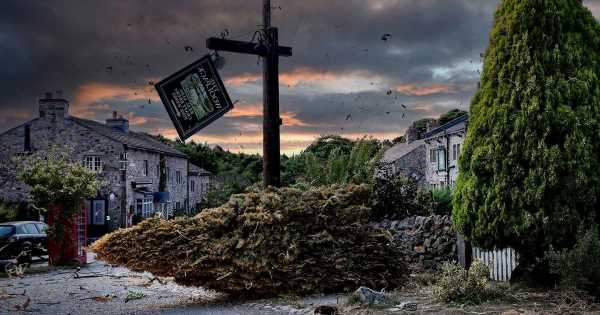 It has previously been revealed that the village will be changed forever as a devastating storm hits, kickstarting a chain reaction of events that will change the Dales forever.

While earlier this month, Emmerdale fans were given their first glimpse at what to expect in the upcoming 50th anniversary episode.

And teasing even more details on Thursday 6 October, the ITV soap's boss revealed new spoilers, including a "really big bang" that propels Emmerdale into the New Year.

Speaking to press, including OK!, Jane said: "Well, it is a roller coaster of emotions and there is a visual impact, I think it will blow more than your socks off, put it that way.

"We're going see our characters tested in not just their physical strength, but their emotional strength as well. And there's gonna be a lot of tears, I must warn you about that. We'll see our community have to deal with the aftermath of this horrific storm.

"It has already started with Aaron's return, we've seen that on screen, we of course have the Faith storyline coming up, which is going to be incredibly sad, then we go into our storm, which has got more than one stunt across the week.

"And then just when you think things can't get any worse for our Emmerdale characters, they really, really do. And we end the month on a really big bang that propels us well into the New Year…"

Jane cryptically added: "Not all the cast come out of this flourishing, but they will have a flourishing exit, shall we say?"

The special anniversary episode will air on Sunday 16 October and Jane previously said she wanted to make the hour-long special "a treat for all our loyal viewers".

She added that she wants to ensure fans are "gripped to the edge of their seats as the stories unfold".

It comes amid claims that Liv Flaherty, played by Isobel Steele, is reportedly set to be "killed off" on the ITV soap.

According to reports, the actress, 21, is said to be wanting to focus on music and her character, Liv, is set to be "killed off" in dramatic scenes later this month.

A source told The Sun : "It’s been a big decision for Isobel but she’s ready to try new things.

"She feels like she’s done all she can at Emmerdale and wants to focus on her music career and make a real go of it. Bosses have pulled out all the stops for the 50th anniversary month and Isobel’s exit will be no different.

"Viewers are going to be on the edge of their seats as it all plays out and Liv is killed off. It’s a real heartbreaker, a death fans will remember for a long time to come."

For all the latest cast updates and juicy Emmerdale spoilers, sign up to our daily OK! Newsletter . Emmerdale continues weekdays at 7:30pm on ITV.