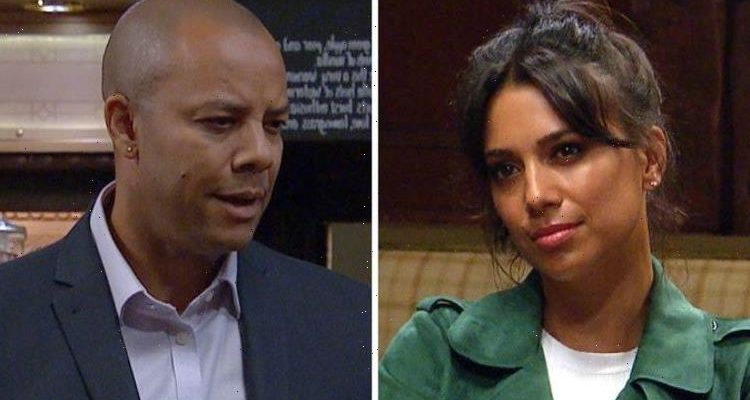 Al Chapman (played by Michael Wildman) could inadvertently reunite his son Ellis Chapman (Aaron Anthony) and his ex-fiancée Priya Sharma (Played by Fiona Wade) when he suggests a new business venture. Priya initially turned Ellis down following this one-night stand but will she change her mind when Al forces them to spend time together?

In upcoming scenes, Al has a proposition for them both, which may include them working more closely than they like.

Al suggests to Ellis and Priya that they join forces to work on a large-scale boot camp survival challenge to be held at the HOP.

Priya tells Ellis to pitch his first idea to Kim before Al steals all the credit, but could Priya have a hidden agenda?

Could Priya finally get her own back after Al humiliated her? And will she drag Ellis along to play her games?

Meanwhile, Priya may realise she still has feelings for Ellis and resumes their affair behind Al’s back.

Priya and Al’s relationship hasn’t always been an easy ride, as viewers will remember the lies and manipulation he put her through.

After getting engaged last year, Priya and Debbie Dingle (Charlie Webb) stole thousands from Kim to frame Al after they found out he was two-timing them both.

In a shock twist, Kim confronted Al for stealing money from the HOP bank account and threatened to destroy him.

Earlier this year, Priya also embarked on a shock affair with Al’s son Ellis after the pair had slept together on a one-night stand.

Knowing they had an important supplier visiting, Al, Priya and Jai Sharma (Chris Bisson) attempted to work together

When the supplier arrived and quickly made clear that she wouldn’t be working with someone like Al, he accused Priya of telling her about his recent love-rat behaviour.

Al had no idea that Charity Dingle (Emma Atkins) was behind supplier Chloe finding out the truth, and so he sacked Priya, thinking she was trying to sabotage his work in another act of revenge.

Upset and heartbroken, Priya found comfort in Ellis, who wasted no time telling her that she deserved better than his dad.

However, feeling embarrassed and ashamed of what she had done, Priya quickly cut things off with Ellis and admitted she still had feelings for Al.

She told Ellis that it would be better if they kept their distance and knocked him back further by telling him she didn’t want to be friends and they should keep their relationship professional.

However, will she change her mind when they spend more time together?

Also, upcoming next week, it soon becomes clear that Kim is preoccupied with her latest purchase, a racehorse she’s called “Medicinal Brandy”.

Viewers will know that Kim Tate (Claire King) was stunned to realise that her own son Jamie Tate (Alexander Lincoln) was poisoning her earlier this year after suffering from a myriad of mystery symptoms.

Unfortunately for him, Paddy Dingle (Dominic Brunt) soon becomes wrapped up in Kim’s games as she punishes Paddy for allowing Jamie back into the vets.

Soon Paddy finds himself doping Kim’s horse to make sure that he wins in the races, thinking it’s a one-time thing.

However, Kim soon starts to manipulate Paddy into doping her horse more often in exchange for money, which he sees as an opportunity to get him out of his money troubles.