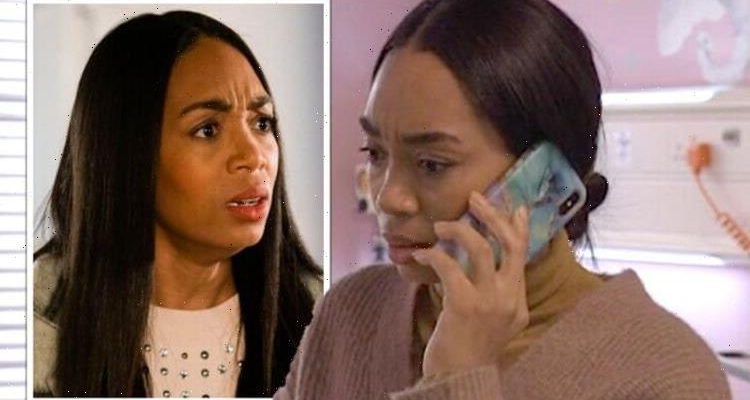 BBC soap fans were thrilled when serial killer Gray Atkins (played by Toby-Alexander Smith) was finally caught on EastEnders. The murderer was eventually arrested by police after an intense pursuit around Albert Square. His wife Chelsea Fox (Zaraah Abrahams) is now left struggling to process everything that’s happened. In the aftermath, Chelsea has been considering giving up her newborn son Jordan for adoption. According to official soap spoilers, her mother Denise Fox (Diane Parish) will try her best to convince her not to go through with the adoption. However, could the stress of the situation end up impacting Chelsea’s health and wellbeing?

In upcoming scenes on EastEnders, the adoption continues to play on Chelsea’s mind.

Later on, Denise is concerned to hear Chelsea lied to her about her whereabouts.

She soon catches her daughter having an appointment with a social worker about baby Jordan’s adoption.

Denise desperately tries to change her mind, but Chelsea’s adamant she’s made her decision.

Denise later continues her attempts to convince Chelsea to not give up Jordan for adoption.

She brings Chelsea to watch Raymond play, emphasising her love for her son.

Regular viewers will remember Denise originally gave Raymond up for adoption when he was first born.

Years later Raymond’s adoptive family were killed in a car crash and Denise changed her mind about looking after him and decided to bring him up herself.

However, Denise’s attempts to convince Chelsea only makes her more adamant that giving Jordan up for adoption is the right decision.

Meanwhile, struggling to cope with everything that’s gone on with their father, Mack (Isaac Lemonius) and Mia Atkins (Mahalia Malcolm) lock themselves in the house so they don’t have to go to school.

Their grandfather Mitch Baker (Roger Griffiths) tries his best to encourage them to come out.

However, he soon receives news from Callum Highway (Tony Clay) that Bernie Taylor (Clair Norris) has gone into labour.

In a state of desperation, Mitch asks a reluctant Chelsea to help keep an eye on the kids as he needs to find Karen Taylor (Lorraine Stanley).

As Mitch speedily heads off, Chelsea tries to talk to Mack and Mia.

Seeing how the two children have been impacted by their evil father’s actions could further convince Chelsea that giving Jordan the chance of a new life with another family is the right decision.

Will she go through with giving Jordan up for adoption?

Later on, Chelsea finds a worrying letter about Gray. Could her villainous husband still be causing her stress from behind bars?

If Chelsea doesn’t deal with her trauma soon her wellbeing could end up taking a hit.

If she does decide to give her son up for adoption, Chelsea may end up feeling alone and isolated.

As she struggles to deal with her emotions following Gray’s reign of terror, could Chelsea end up spiralling into a depression?

She may soon receive a devastating mental health diagnosis if Gray’s actions continue to haunt her.

EastEnders continues Tuesday at 7:30pm on BBC One.

Those who struggling with depression can get help from Samaritans by calling their free helpline: 116 123.