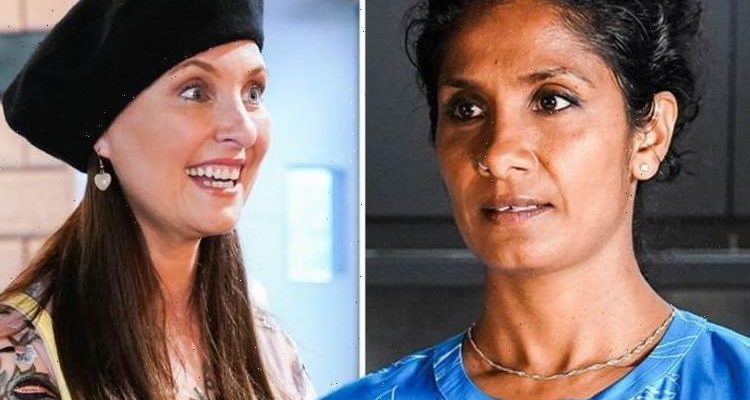 Honey Mitchell (played by Emma Barton) has been slowly breaking down Suki Panesar’s (Balvinder Sopal) walls and cementing their friendship in EastEnders. However, as it becomes clearer that the mum-of-two is the only one who can get through to Suki, will BBC soap fans watch a romance unfold?

As Suki struggled to cope with the loss of her son Jags Panesar (Amar Adatia), Honey stepped in to help her.

Having recovered from an eating disorder herself, Honey spotted the signs and encouraged Suki to tackle her grief.

Their friendship hasn’t gone unnoticed and the Panesars have been surprised by Suki warming to Honey.

He explains he’s renting space in the laundrette to sell and fix phones.

The Minute Mart owner invites Honey for dinner and they pair enjoy each other’s company.

However, when Ash Panesar (Gurlaine Kaur Garcha) interrupts them, Suki struggles to hide her annoyance.

Suki is surprisingly jealous of her daughter breaking up her meal with Honey.

Could the shop owner have developed feelings for the mum-of-two?

Ash reveals she’s failed her performance review and won’t be progressing in her application to become a GP.

She blames her mum for previously threatening her manager and fears her career is over.

The mum plans to expand her property portfolio and buy a property that she can turn into a GP surgery for Ash.

But, the doctor is furious with her mother and tells her she wants nothing to do with the new plans.

Honey steps in and defends Suki making Ash realise her mum is genuinely trying to help.

Later, Suki and Honey attend the Pride of Walford Awards at Walford East.

Suki is thrilled that Honey asked her to the event and the pair enjoy the evening together.

Will Suki admit she has feelings for Honey or will she keep her true feelings quiet?

If the shop owner does tell her employee how she feels, Honey may reject Suki.

However, the mum-of-two has been neglecting her relationship with Jay Brown (Jamie Borthwick) in order to support Suki.

Could the pair realise they feel the same about each other and embark on an affair?

EastEnders airs on BBC One on Mondays, Tuesdays, Thursdays and Fridays.