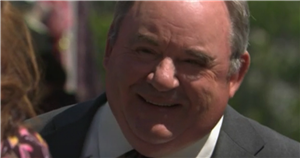 EastEnders fans have predicted Mr Lister will be the next major villain on Albert Square as he puts the moves on Honey Mitchell.

While the entire town mourned the loss of the colourful character who arrived on the soap less than a month ago, the brunette beauty was also struggling with her separation from Jay Brown.

But after hearing of her newly single status, her boss Mr Lister jumped at the chance to take her out to dinner after work.

After listening in to her conversation about her separation from Jay, Mr Lister said: “I couldn’t help overhearing just then [that] you’re currently without a consort.”

As Honey struggled to understand his bizarre choice of words, he added: “A consort, a partner, a man.”

Surprised about his line of questioning, the brunette beauty attempts to brush past the awkward conversation by simply explaining: “Oh, yes, well, things didn’t work out between Jay and myself but I can assure you Bob that it hasn’t affected my work in any way.”

But Mr. Lister isn't the only man who has eyes for Honey, after Billy Mitchell attempted to put the moves on the business woman in an attempt to reignite their romance once more.

Billy asked: "Honey, how come when we broke up it wasn't all smiles and jokes like [yours and Jay's?]"

Surprised at his interest, Honey bluntly replied with: "Which time Billy because we've broken up several times. It might explain the lack of smiles and jokes."

But it’s fair to say fans were feeling majorly creepy vibes from the 60-year-old market inspector as they flooded to Twitter to share their concerns for Honey online.

One user penned: “Mr Lister is literally breaking so many standards and laws wanting to sleep with Honey who he employs [vomit emoji] #EastEnders.”

Another agreed: “Omg. Mr Lister continues to be a slimy, hound dog after Honey…[vomit emoji] Please gtfo! [Billy can join him…] #EastEnders.”

A third chimed in with: “All he’s doing is wanting to chat up Honey another Billy in the making.”