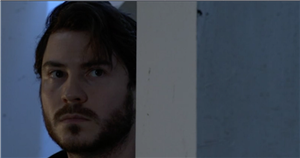 The market stall owner had been planning to run away with his fiancé Whitney Dean (Shona McGarty) after he grassed on the Mitchells for their part in the robbery.

As Whitney took little Arthur to the loo, a furious Gray appeared out of nowhere and confronted Kush.

The scheming solicitor raged at Kush for "stealing" Whitney from him and his children, who she regularly looked after.

After saving Gray's life just before, Kush was pushed onto the track by the evil lawyer just as a train was passing.

However, viewers at home couldn't help put point out that the lack of commuters around in the empty London Underground staton.

Taking to Twitter, one fan of the BBC One soap penned: "Lucky the station was empty."

A second person posted:"So this is an empty underground station? In London? Really?"

While a third viewer said: "Never seen the underground so empty…no one else around, no one."

"Gray, what are you doing? Did you follow us?," Kush asked after spotting the lawyer in the distance.

"You shouldn't have lied to me," the deranged lawyer responded.

Kush questioned whether he had been drinking, to which Gray responded that he had made Whitney lie to him.

"You honestly think that you've won," an angry Gray said.

The legal advisor snapped as he asked: "Where are you taking her?"

"If you think lying low for some weeks in some fleapit hotel is going to just solve your problems, well guess what?

"The Mitchells are still going to be here when you come back… You're not coming back. You're going to force her to leave because of your misdeeds."

"No one's going to be forcing anyone," Kush said before demanding that Gray "calm down and go home"

"I know why you're angry – you've got feelings," Kush continued before adding "But those feelings aren't real".

"You just lost your wife and you're still grieving so you've latched onto Whitney and now she's leaving, something's gone, something's snapped. I think I might understand why you're upset."

Gray hit back: "No! No, because if you did, you wouldn't be taking her away from me."

"She was your childminder for a couple of months and that is it! That's all it was,"Kush responded.

Gray insisted: "No! She was everything to me! Without her I have nothing left!"

"It's all in your head," Kush replied.

He said: "I'm sorry, I'm sorry if that's how you feel but it is fantasy, Gray. Your brain ain't right! I think you need help."

Gray quickly lunged to tackle Kush, but he instead fell onto the tracks.

Kush somehow managed to find the strength to pull Gray up onto the platform and pointed out to the villain: "You could have killed yourself"

However in a shock twist, Gray turned Kush around and pushed him in front of a moving train.

Will Gray finally get caught out?

EastEnders continues Tuesday on BBC One at 7.35pm