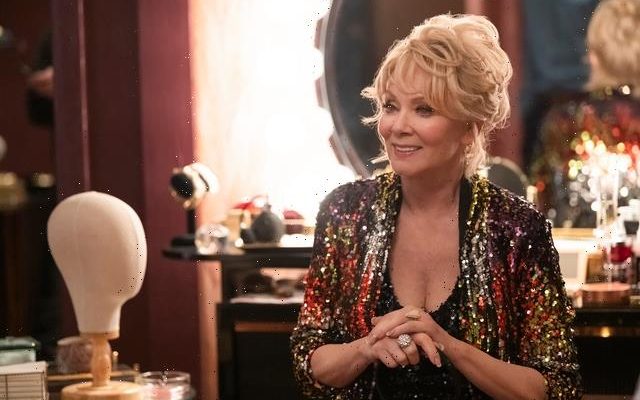 Ah, May. The flowers are blooming, the birds are chirping, Oscar season has finally packed its bags and flown north for the summer. It’s Emmy season, baby. Catch the fever!

As so often happens with these types of things, frontrunners began to appear on a number of, well, fronts, making it seem as though the the Emmy races in marquee categories — comedy series, drama series, limited series — might already be locked up, sapping the season of all its innate intrigue.

But fear not, because the Ides of May have some incredible things lurking just around the corner, all the better to attempt to derail any straight shots to victory and, in the process, livening up a few awards races that could have been ever so dull otherwise.

Here’s what to keep an eye on as the next few weeks unfold.

If you had told someone at the beginning of the pandemic that all of their friends would, at some point, be obsessed with a stylish limited series focused on the wild world of chess, their inevitable skepticism would be well-deserved.

And yet, Anya Taylor-Joy vehicle “The Queen’s Gambit” proved to be as much a prodigy as Beth Harmon, its central character. Visually appealing and innately consumable, “Gambit” benefits from relying on beats present in any great sports story and utilizing them in an unexpected way. To say that it succeeded would be an understatement with the series winning accolades from the Golden Globes, Critics Choice Awards, WGA, PGA, DGA, and SAG (for Taylor-Joy) as well as wins in editing, cinematography, makeup, and sound mixing.

It is, as implied, the favorite in limited series. But is it unbeatable?

Now, don’t get me wrong. No one is surprised that Barry Jenkins, Oscar-winning screenwriter, director of Best Picture-winning “Moonlight,” directed the hell out of Colson Whitehead’s Pulitzer Prize-winning “The Underground Railroad.” But to understand the breadth of Jenkins’ achievement it must be seen to be believed. Make no mistake, “The Queen’s Gambit” is still the favorite in limited series but it might have a much tougher road to victory than it ever imagined.

Hello, have you heard the good news? “Ted Lasso” exists! If you’ve read IndieWire in the last nine months, then you’re well aware of the TV section’s affection for this feel-good sports comedy, which served as a pop culture panacea during the darkest days of the pandemic. It was a series that seemed to be an old-fashioned word-of-mouth hit as chatter around it continued for months after its release.

Affection for Jason Sudeikis (who plays the titular character) and the series was validated in the past several months, earning a number of prestigious awards while having to go head-to-head with the reigning Emmy-winning comedy series “Schitt’s Creek,” as the Pop TV comedy took its final victory lap.

The single biggest thing in favor of “Ted Lasso” as Emmy favorite is its relentless positivity. What could have been an insurmountable irritant is in fact what makes the series stand out as a singular bright spot in an otherwise bleak landscape.

There’s an argument to be made that it should be another HBO Max freshman comedy, “The Flight Attendant,” in this slot, but alas I am not the one to make it.

Instead, my gut remains convinced that if anything can upset the “Ted Lasso” ticker tape parade it’s “Hacks,” a darkly comedic take on, well, the comedy scene, and a searing examination of fame, success, and the price you pay for all of it.

TV legend Jean Smart and newcomer Hannah Einbinder serve as the oil and water center of the series which manages to do what so many series about comedy fail at: being funny.

“Ted Lasso” maintains its edge but if voters are ready for a slightly more sardonic look at the world, “Hacks” is the way to go.

Were it not for “The Queen’s Gambit,” “The Crown” would have been far and away the most successful Emmy contender over the last few months, amassing several prestigious wins, including from PGA, WGA, and the American Society of Cinematographers, as well as a Golden Globe win for supporting actress Gillian Anderson. (If that list looks less impressive than “The Queen’s Gambit,” consider that “The Crown” is a UK production and eligibility rules get fuzzy for the guilds.)

What “The Crown” has going for it, above all else, is that Season 4 is perhaps the best the show has ever been and at this point, it’s the perfect opportunity for this often overlooked series to finally triumph at the Emmy Awards. Also, it doesn’t have that much competition when the day is done. So in short, “The Crown” is great, the field is weak, what could go wrong?

No, really, what could go wrong for “The Crown”? Not much, it seems. “The Handmaid’s Tale” returns with its fourth season and might be the biggest competition for the Netflix series, also buoyed by a weakened field and an always dynamite performance at its center in Elisabeth Moss.

And yet, it still feels like a stretch. At this juncture, “The Crown” might just be untouchable. We’ll see if it holds.