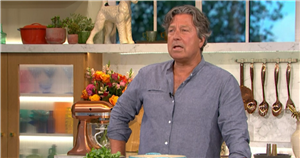 Viewers were torn between finding the swipe hilarious and rude, but it seems John Torode was able to laugh it off as John, Eamonn and Ruth Langsford were all chuckling over the biscuit discussion.

It comes as Eamonn and Ruth were discussing Morisson's new mash-up product of a Bourbon Cream, which sees the Custard Cream inside in a Bourbon biscuit.

However, as John recalled how he ate his biscuit, he said: "See it's not about the combination of the biscuit for me, it's about how you eat it.

Ruth asked if that was how he ate his, but Eamonn was disgusted by the mere suggestion.

Eamonn responded: "You're such a dirty pig. Imagine living with you. You're like the sort of child that would try to lick your plate clean.

Fans were unsure whether they found it hilarious or completely shocking, with one user taking to Twitter, one user wrote: "Rude Eamonn!"

Meanwhile, another user wrote: "You're such a dirty pig [laughing emoji] don't ever change Eamonn!"

As Eamonn toned back his disgust in how John eats his biscuits, he admitted that he was a fan of the new mashup from Morrisons, despite not usually being a fan of Bourbon biscuits.

It certainly launched a discussion from fans on Twitter about their favourite biscuits and exactly how they eat them, with some viewers admitting that they headed straight to their cupboard following the new cravings.

Aside from their biscuit discussions, This Morning will be discussing various topics on the show this morning, including Covid-19 and the holiday traffic light systems and maintaining a relationship after a tragedy.

This Morning returns on Monday on ITV at 10am.