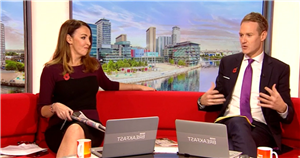 Dan Walker was missing from BBC Breakfast on Wednesday, a day when he is usually scheduled to present alongside Sally Nugent.

He was replaced by stand-in presenter Jon Kay, who occasionally appears alongside Sally or Naga Munchetty.

Strictly Come Dancing star Dan usually hosts the programme from the red sofa from Monday to Wednesday each week, while Charlie Stayt steps in on Thursdays and Fridays alongside Naga.

However, it seems Sheffield-based Dan is currently busy in the centre of London – likely for Strictly rehearsals with his professional partner Nadiya Bychkova ahead of Saturday's Musicals week live show.

Taking to Twitter on Wednesday morning, it seemed Dan wasn't simply having a lie-in, as he snapped a picture of a menu he passed on his way into the city at just past seven o'clock in the morning.

Alongside a snap of a menu, Dan hit out with the tweet: "I’m not sure what causes more distress… the ‘fruit selection’ for £13 or the 8 quid chips! #LondonPrices."

Dan's legion of loyal fans and followers quickly flocked to respond to the tweet, with one writing: "Plus 12.5% service charge. At least Dick Turpin had the decency to wear a mask."

"I’m never sure how to interpret 'freshly sliced fruit'. Is it fresh fruit or is it just sliced moments before being served. For £13, I’m hoping the latter," another joked.

While a third said: "The burger which is 20 quid and then an additional 2 quid for cheese and bacon? Scandalous."

It comes after Dan responded to the news that his former co-presenter Louise Minchin – who quit the show earlier this year – would be heading into the I'm a Celebrity… Get Me Out of Here! castle on Sunday.

Louise admitted she hadn't told Dan about her news after he neglected to tell her about his Strictly stint.

But Dan took the news in his stride, as he said on the programme that she's likely to reach the "latter stages".

Chatting to Sally on the sofa, he said: "We're pretty convinced she's going to be brilliant, aren't we?"

Sally responded: "Yes. I thought you were going to go one further there!", suggesting Dan would back Louise to take the crown and become Queen of the Castle.

Clearly not wanting to jinx it, Dan said: "Well, you don't want to go early. I think she'll reach the latter stages."

Asked what she will miss in Gwyrch Castle in Wales, Louise said: "Gosh, I'm going to miss my family. I'm missing them already.

"And just things that I'd really taken for granted, like a hot bath! I love hot baths and I love my warm bed!"

She went on to reveal which luxury item she will be taking with her: "I am allowed a luxury item. I'm really pleased with my luxury item – it is a fluffy hot water bottle.

"I really feel the cold in my hands and feet so I'm hoping that's going to make me feel much better!"

BBC Breakfast airs from 6am every day on BBC One.