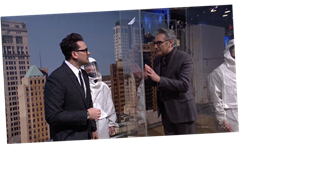 "I'm so honored to be hosting Saturday Night Live. Somewhere my 13-year-old self has fainted in a really melodramatic way," the Schitt's Creek star and creator, 37, began his monologue.

"Now the past 12 months have quite literally changed my life in so many ways, both good and not-so-good. Some good: People finally started watching our show Schitt's Creek and were fortunate enough to win nine Emmys this year. Beyond a dream come true," Levy said.

"The not-so-good: Those Emmys were quite literally thrown at us by a stranger in a hazmat suit," the actor said, referring to the hazmat suit-wearing presenters who visited the homes of the winners live during the September 2020 ceremony.

"The good: I've been getting stopped on the street by all different kinds of people, which is new and fun and different," Levy said. "The not-so-good: Those people are mainly screaming 'ew' at me, which was a line I wrote for the show that will now haunt me for the rest of my life."

The star added, "But in all seriousness, for all the good and not-so-good, somehow I have found myself here on this iconic stage, standing in front of all of you and trust me when I say this, it has only been good here at SNL."

Then, Levy took the audience on a tour of Studio 8H as he was interrupted by a safety officer, played by Aidy Bryant, who kept reminding the host about the six-feet protocol to maintain safe social distancing amid the current coronavirus pandemic. As he walked the halls, he ran into his father Eugene Levy, who was stuck in a clear box.

"Dad? All the way from Los Angeles?" Dan said as his proud dad replied: "Son! Wow look at you! No, I flew in to wish you luck tonight but because I traveled, I'm now in this isolation box." The Happiest Season star was joined by musical guest Phoebe Bridgers, who was also performing on the NBC stage for the first time.

It's been an exciting past year for both, with the final season of Schitt's Creek garnering a record-breaking nine Emmy Awards in September and Bridgers up for four Grammy Awards at the upcoming ceremony, including best new artist.

In addition to the Emmys, Schitt's Creek has been nominated for five Golden Globe Awards and five SAG Awards, including individual nods for Levy, his dad Eugene, Catherine O'Hara and Annie Murphy.

"What a way to wake up! We are so proud of the entire cast & crew of Schitt's Creek, and we are thrilled to celebrate the end of this series with the show's first Golden Globe nominations. Thank you to the HFPA!" Dan and Eugene, who co-created the hit show together, said in a joint statement following the Golden Globe announcements on Wednesday.